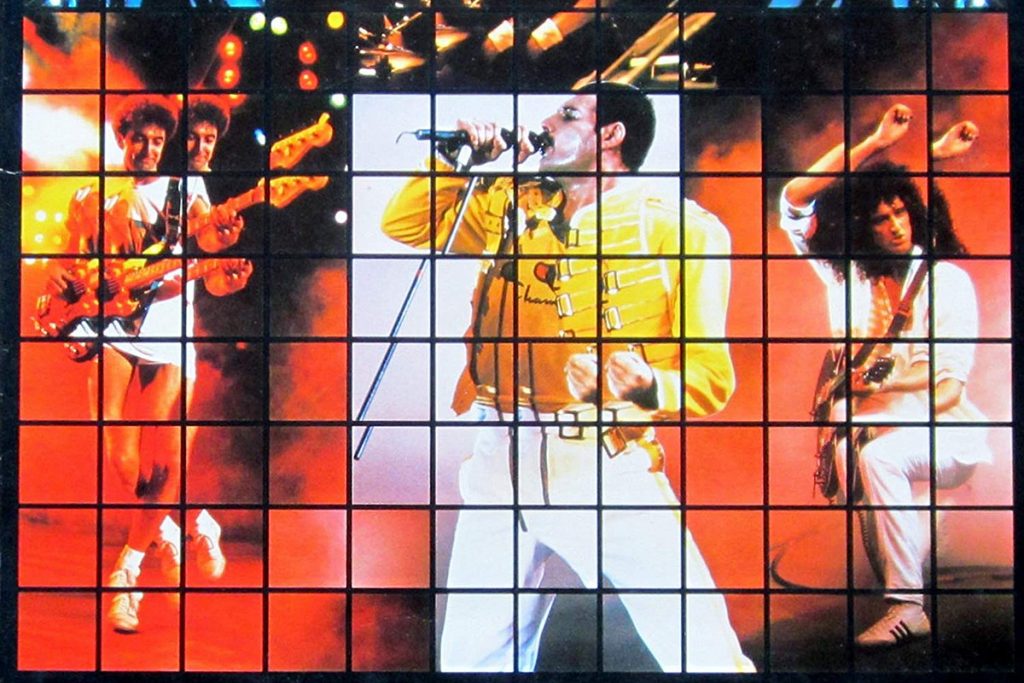 In 1986 Queen ruled the rock world (well, except perhaps the U.S.) having secured the throne with their breathtaking performance at Live Aid the previous year. They’d followed that up with the release of 12th studio album A Kind of Magic, which had sold 100,000 copies in its first week and would sell six million more in the future.

Next had come the Magic Tour, a 26-date royal progress through Europe, including a triumphant return to London’s Wembley Stadium and a dramatic appearance before 120,000 subjects at England’s Knebworth Park to close the journey. It had also included the largest show ever performed by a Western band in Communist Eastern Europe, when they drove their 13-truck extravaganza to play for 80,000 people in Budapest, Hungary.

It seemed a good idea to release an album from the tour. But in fact, Live Magic – released on Dec. 1, 1986, although it didn’t appear in the U.S. until a decade later – proved to be a significant dent to their crown, and became known as one of the most disappointing live releases of all time.

The fundamental problem with Live Magic is that it attempts to contract the experience of a full-blown Queen tour into a single disc. The idea of presenting recordings from multiple locations is a good one, and so – up to a point – is the concept of providing a lightning-fast taster of the band’s abilities, perhaps aimed at new fans.

But that’s not how it plays out. Forcibly crushed into a running time of 49 minutes and 19 seconds, much of the band’s extravagance and regality is stripped away. It’s difficult to imagine “Bohemian Rhapsody” without the operatic section – it’s even more difficult to hear it rendered that way on the disc. “We Will Rock You” loses 30 seconds while “We Are the Champions” is stripped of 60 seconds, and a verse and chorus of “Tie Your Mother Down” are edited out. Not every song from the set list makes the cut, and those that do aren’t in the original order. What’s worse is, better editing – such as removing long sequences of nothing but crowd applause – would have allowed room for at least some of those missing musical passages.

What were they thinking? Perhaps there’s a clue in an interview with Freddie Mercury that took place midway through the tour, when he was once again asked to discuss the band’s fragile existence. “It’s trying to keep the band going when everybody says it’s breaking up,” he reflected. “[W]e were all getting really desponded and we all wanted to do different things, and when you have that in your sort of bloodstream… the slightest things that happens. you just say ‘Fine, that’s it’ … you just need the slightest excuse to actually break up the band.”

Asked what kinds of things the members fought over, he replied: “A lot of the time [it’s] how each musician is displayed on an album… so like if I had more songs than somebody else, it would make them a lesser musician, you see what I mean? … I’ve always tried to sort of make it very diplomatic, so I just say OK, no matter what it is, we all have even songs from now.” He added: “At this point of time I think that’s the only way for Queen to survive.” So perhaps Live Magic is a horse designed by a committee – an example of so many compromises being made that the jigsaw no longer makes up a picture.

Queen Discuss Their Argumentative Nature in 1986

The tragedy is made even more Shakespearean by hindsight. The Magic Tour was to be Queen’s last with Mercury – he’d discovered he was HIV-positive after the road trip but before the live album’s release; and he was diagnosed with AIDS the following year. When he revealed his condition to his bandmates later, they took the decision to remain off the road and focus instead on studio work.

Few live albums could carry that amount of emotional baggage, and Live Magic certainly wasn’t up to the challenge. Perhaps in recognition of that fact, Queen released the double-disc Live at Wembley ’86 the year after Mercury’s death, which, with a running time of 110 minutes, did far more justice to the legacy of one of rock’s greatest in-concert acts; as did Hungarian Rhapsody, the Budapest show, which came out in 2012.