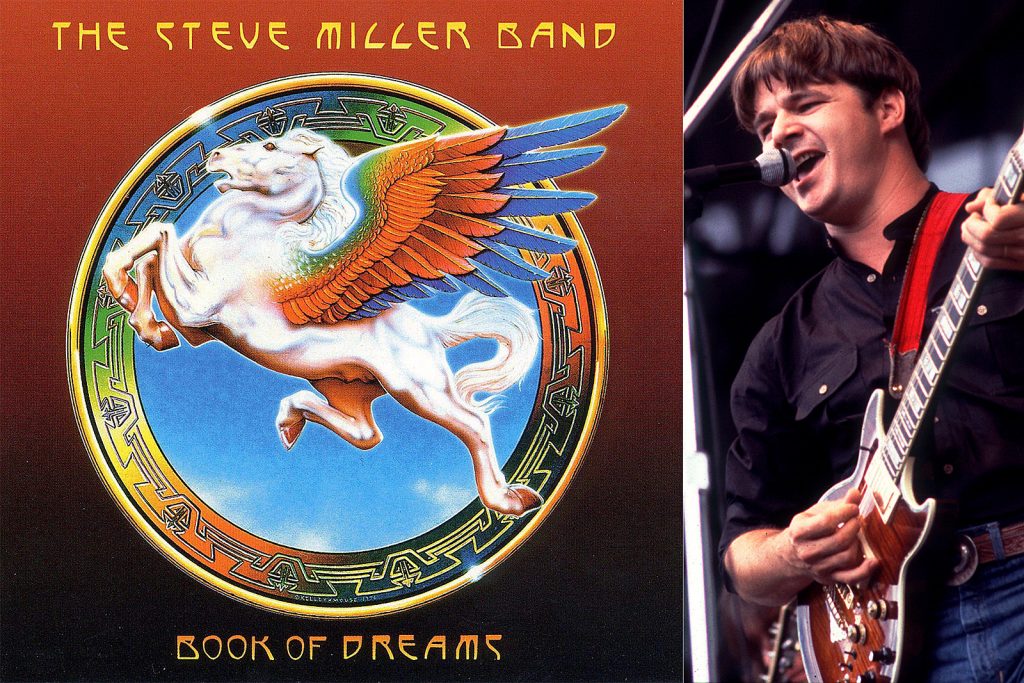 The Steve Miller Band‘s Book of Dreams was the culmination of what could only be called a dream period for the guitarist and his cohorts.

Riding high on the platinum success of 1973’s The Joker, Miller — who’d been hard at it on his own since 1968 and, truthfully, well before that — took an unusual and perhaps career-threatening step. After recording and releasing eight albums in a little more than five years, and spending 250 days and nights on the road, he was feeling burned out. An initial attempt to follow up The Joker flamed out. So in 1975, Miller informed his booking agent that he’d be taking a year off the road to focus on songwriting and recording. He set up shop in the Northern California city of Novato, with an 8-track recording set-up and was joined by bassist Lonnie Turner and drummer Gary Mallaber.

The gamble paid off. In September 1975, during 10 or so days of sessions at San Francisco’s CBS Studios, the trio recorded tracks for material that became the basis for not one but two albums, and one of the most successful back-to-back eras of any rock artist’s career. Both 1976’s Fly Like an Eagle and the following year’s Book of Dreams were certified multiplatinum, Top 5 smashes. Between them, they launched five Top 20 singles and vaulted Miller to stadium status as a touring act, alongside Peter Frampton, Fleetwood Mac and Eagles.

Decades later, however, it’s the creative endeavor that Miller remembers best. “That was a period of time when I was working on a lot of songs at the same time for Fly Like and Eagle and Book of Dreams,” he told UCR a few years back, recalling the nearly 18-month studio hibernation that was interrupted just once, to support Pink Floyd at Knebworth on July 5, 1975, when he debuted Fly Like an Eagle‘s “Rock’n Me.” “I had verses and lyrics and music, and I was just interchanging a lot of it until I got everything right. It was just totally immersed in what I was doing, and I felt like it was really in a groove.”

Though Miller himself is hesitant to differentiate between the two albums — both are similar in tone, featuring strong songwriting and deft sonic experimentation — Book of Dreams still feels like evolution and refinement from Fly Like An Eagle and is arguably more consistent. It’s worth noting that Book of Dreams songs comprise half of the 14 tracks on 1978’s 15-times platinum Greatest Hits 1974-78. Miller fleshed out the band beyond the core trio, adding keyboardist Byron Allred full-time along with a pair of guitarists: Greg Douglass and David Denny, the latter a former SMB crew member who wrote the album’s blues showcase, “The Stake.” Harmonica ace Norton Buffalo joined the fold on that track and “Winter Time,” ultimately becoming part of the SMB touring unit.

Book of Dreams took off, literally and figuratively, with “Jet Airliner.” Coming out of the 65-second synthesizer wash “Threshold,” the track was written by blind singer-songwriter Paul Pena from Cape Cod, and Miller recalled in the liner notes to a 1994 Steve Miller Band box set that “when Paul showed me the song, it was about his manager, Albert Grossman, and it was very bitter.” Miller softened the lyrics, famously changing the line “funky shit going down in the city” to “funky kicks” for the radio version. Another smart move, since “Jet Airliner,” as the album’s lead single, soared to No. 8 on the Billboard Hot 100.

The rhythmically inventive “Jungle Love,” written by SMB members Turner and Douglass — originally for Dave Mason — was another success, reaching No. 23 and making recurring appearances on the CBS sitcom Everybody Loves Raymond. Miller didn’t hear the song until the final day of mixing. “Lonnie brought it by,” Miller wrote in the box set. “We decided to stop mixing and record it that day. … We finished it in less than an hour and it made Book of Dreams.” The next single, “Swingtown,” did even better, reaching No. 17 on the Hot 100, and featuring a Condor Innovator, one of the first guitar synthesizers.

Book of Dreams was certified triple platinum and peaked at No. 2 on the Billboard 200, one notch higher than Fly Like An Eagle. It wasn’t all dream-like, however. “Even when I was selling all those records and all that stuff, I was basically arguing with my record company [Capitol] all the time because they were not doing a good job,” Miller told UCR. “It was a fight, and it was a lot of work, and it wasn’t a lot of celebrating. … On the other end of it, I go, ‘Yeah, I had a charmed life in that I’ve had this really creative life and I’ve worked really hard and I’ve been successful and have respect, and now I’m able to work as I like. But that’s hindsight.”

As was typical of the artist, Miller followed his mid-’70s success with another hiatus, starting his next era with 1981’s Circle of Love.