When Steven Seagal Opened for Sammy Hagar and Made $1,000 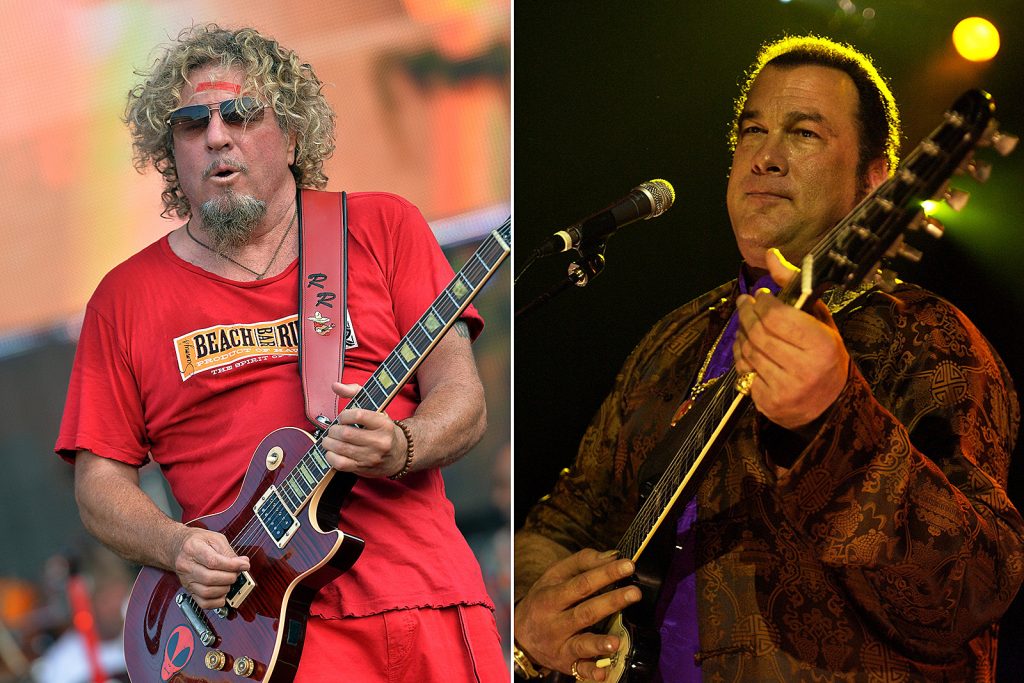 Actor Steven Seagal and Sammy Hagar might seem like strange bedfellows, but they actually shared the stage for one night.

Music-industry maverick Miles Copeland, of Police and I.R.S. Records fame, found himself unexpectedly in cahoots with Seagal after he reached out in search of a manager. “I took the call, almost out of curiosity because you know, it’s Steven Seagal!” Copeland said with a laugh during an exclusive interview with UCR. “You see him in the movies, and I knew he was a big star overseas. I was intrigued.”

Seagal, as it turns out, had grown up with music in his blood. “I’ve been playing music since I was a boy,” he told the Washington Post in 2006. “I’m a musician, man. This is what I do. I got a little bit of pride about the blues. I’m not like these actors who can’t play.”

He collected prized instruments once owned by Muddy Waters and John Lee Hooker, and once boasted during a subsequent interview that he’d already collaborated with every musician on his wish list – including Stevie Wonder.

The Motown legend appeared on Seagal’s debut, 2005’s Songs from the Crystal Cave. “He’s an old friend of mine,” Seagal said at the time. “A great friend and musician, and he was kind enough to come and do it.”

“I decided, well, what the hell? I said, ‘Okay, let’s do it.’ He actually wasn’t a bad guitar player. He had tons of guitars and he seemed serious,” Copeland remembers. “I’d worked with other movie stars before, and they all were drawn to doing movies much more than they were music, but Steven seemed to be genuine. He wanted to actually do music. He wanted to have a band; he wanted to tour.”

He lined up a series of tour dates, but warned Seagal of budget issues before they even left home. “The way he wanted to travel – first class hotels, limos and the like – it would lose money,” Copeland writes in his new memoir, Two Steps Forward, One Step Back. “He didn’t care.”

Copeland adds that they “did a lot of these clubs and he’d show up in his limo at some crap club in some dumpy city and I’d say, ‘Steven, this doesn’t really make any sense: You’re spending thousands of dollars to earn 500 dollars,’” the manager tells UCR. “Then, he said, ‘Well, I want to do bigger shows.’”

Enter Sammy Hagar, who’d approached Copeland earlier about a management deal. That didn’t come to pass, but they made a lasting connection. So he placed a call to see if he could get Seagal’s band, called Thunderbox, on the bill for Hagar’s June 4, 2006 performance at the Cricket Pavilion in Phoenix.

At the time, Hagar was touring in support of Livin’ It Up, and split his show into two sets. The first focused on solo material with his current band, the Wabos, while the second reunited Hagar with former bandmate Michael Anthony as the Other Half for a run through songs from their time in Van Halen.

Hagar described the experience as “so weird. … He had a 10-piece band, probably. He had security guards and an entourage of 25 to 30 people,” Hagar says with a laugh, during a separate interview with UCR. “I’m the headliner of the show and he had to have the big dressing room, because he had so damn many people! All packing heat!”

Both Hagar and Copeland were “intrigued” by Seagal. “He’s like six foot five, larger than life almost,” Copeland tells UCR. “He’s one of these guys that he swears like a sailor, which you would not expect. Just as he’s going on stage, he hands me two 45s – and I’m like, shocked. I’ve got these two pistols in my hand. Some roadie comes along and says, ‘Wow.’”

Hagar says Seagal had “full-blown pancake makeup on and man, he was dressed like he was ready to do a movie. He was a very interesting character!”

After their set, Copeland said Seagal “walks off stage, takes the two pistols and puts them back in his pockets, looks at me and says, ‘Well, I’ve got to protect myself.’ Then I discovered he was on the hit list of some Mafia crew. I was thinking, ‘God, do I need to be near this guy? But that’s Steven Seagal.”

Later, Hagar began to understand the oddities surrounding this gig. “I started reading all of this stuff and people were trying to kill him and shit. That’s why he was flying private,” Hagar explains. “He had a big ole plane – we’re talkin’, the plane cost 30-grand probably to get to the gig, because he had all of those people. But he was carrying heat. He didn’t walk around without a gun, and that’s a weird way to live.”

As for the concert itself, Hagar was impressed. “He had some really authentic soul-blues guys,” Hagar says. “I think they were out of New Orleans – and he was good!”

Ultimately, however, the alliance between Copeland and Seagal was short-lived. “I only handled him for about five months,” Copeland says now. “You know, he has no business being a rock ‘n’ roll star because he can make a lot more doing movies, and he’s a huge star in Asia and France and all of these other places. But it was an interesting little experience.”

Seagal left a lasting impression on Hagar, too. “He came to Cabo. It was so funny,” Hagar remembers. “I went to pick him up from the airport. I’m sitting there and all of the sudden I see him … getting ready to go through customs. He has a briefcase, a black suit and a white shirt, his kind of white hair and some black sunglasses.

“I looked at him and I said “Oh fuck, this guy,” Hagar adds with a laugh. “Sure enough [makes sound of security alarm going off], they pull him over and they fuckin’ damn near strip-searched him! I’m going, ‘Dude, you can’t dress like that coming to Cabo! You look like the fuckin’ Godfather comin’ in!’ I took him to my house and we spent a couple of days together. He was a very interesting character.”

Hagar’s friendship with Copeland subsequently led him on another musical side trip, this time with the group Baghdad Heavy Metal. Hagar collaborated on “Cosmic Universal Fashion” from their eponymous 2008 album, which was executive produced by Copeland and issued on his personal label.

“Cosmic Universal Fashion” then became the title track for Hagar’s next solo LP, before the project ran aground amid legal troubles.

“I wrote the lyrics and co-wrote a song with a Middle Eastern guy who didn’t speak English whatsoever,” Hagar remembers. “He wrote this music and I wrote the words for ‘Cosmic Universal Fashion,’ and I [later] put it on [my own] record. But that record, I got in a lawsuit with the damn record company right away. It came out and it was never exploited, but it was a really cool song.”