When the Byrds Reunited for Roy Orbison, Complete With Bob Dylan 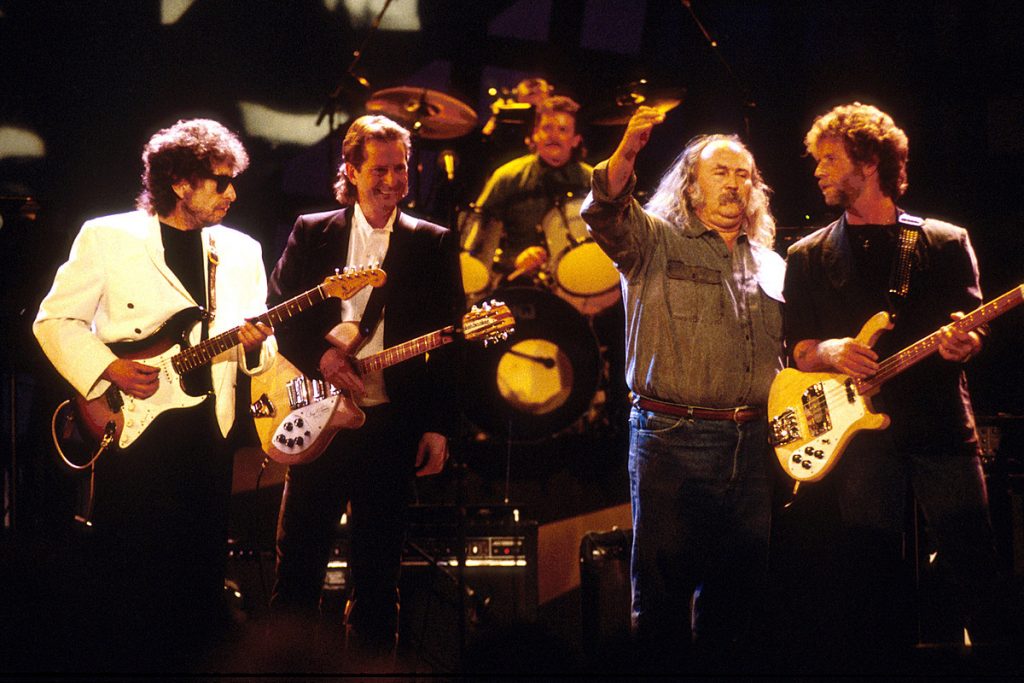 If anything sums up the troubled times the Byrds lived through during the ‘80s, it’s the fact that when Roger McGuinn and Chris Hillman staged a reunion appearance with David Crosby, they had to call themselves the Original Byrds.

In the years leading up to their performance of “Mr. Tambourine Man” on Feb. 24, 1990, the trio had lost a legal battle over the group’s name after a judge allowed drummer Michael Clarke to keep using it. The moniker wound up with Clarke after a series of failed reunions with ever-changing lineups. But by the mid-‘80s, McGuinn, Hillman and Crosby had lost patience.

“First Gene [Clark] went around with a very, very bad band, calling it the Byrds,” Crosby told Spin in 1991. “Well, okay. Gene was one of the original writer-singer guys. But when it gets to be Michael Clarke the drummer – who never wrote anything or sang anything – going out there with an even worse band, and claiming to be the Byrds … and they can’t play the stuff. It was dragging the name in the dirt.”

That was the basis of a legal argument that a judge dismissed in 1989, effectively meaning Clarke owned the name from then on.

Part of the reason the other three lost their case was because, on a number of occasions, they made it clear they had little interest in reestablishing any connection with the Byrds. They attempted to neutralize that by touring under the band’s name, but it didn’t work. So, when they agreed to take part in the Roy Orbison tribute show in 1990, they were forced to add “Original” to their title.

The announcement of their participation created headlines; many fans regarded it as the highlight of what was already an energetic bill that included Iggy Pop, B.B. King and John Lee Hooker – all of whom were there to pay tribute to Orbison, who died in 1988. But the best was yet to come.

“Well, this song was, um, our first single,” McGuinn told the crowd at the Universal Amphitheater in Los Angeles. It wasn’t really a surprise that the Byrds would play “Mr. Tambourine Man”; the surprise came during the second verse, when Bob Dylan, the man who wrote the song, appeared onstage and joined in.

The performance appeared to be somewhat under-rehearsed. After the second chorus, Crosby, who was sharing a mic with Dylan, gestured for him to take over vocals and stood back. Dylan instead began playing guitar, so McGuinn, after glancing uncertainly across the stage, continued to sing lead. Dylan eventually started singing along, allowing McGuinn to move to harmonies.

It’s possible there was some confusion because Dylan’s original version of the song contains four verses, while the Byrds, intent on cutting a radio-friendly single running less than three minutes, used only the second verse. Regardless, the song proceeded toward an equally uncertain but satisfactory ending after around five minutes. “Thank you, all!” Crosby told the delighted crowd.

The following year, all five classic-era members of the Byrds – McGuinn, Hillman, Crosby, Clark and Clarke – put their differences aside to appear together for their Rock and Roll Hall of Fame induction. It was the last time they’d do so: Clark died four months later, and Clarke passed away in 1993.

In 2013, McGuinn rejected the idea of any more reunions, saying, “David and I have talked about this at length, and to me a reunion would just be for the money. We’d go out and play some sheds, maybe gross a couple of million dollars and split it four or five ways. I’m not attracted to expensive things. I don’t need a Ferrari or anything like that. … I’m happy with the Byrds as a good memory.”

Still, McGuinn did reunite with Hillman in 2018, marking the 50th anniversary of their album Sweetheart of the Rodeo. That led to another round of issues, because they didn’t invite Crosby to take part – he was fired by the time the 1968 LP was recorded – and had to explain that they didn’t meant to upset him.