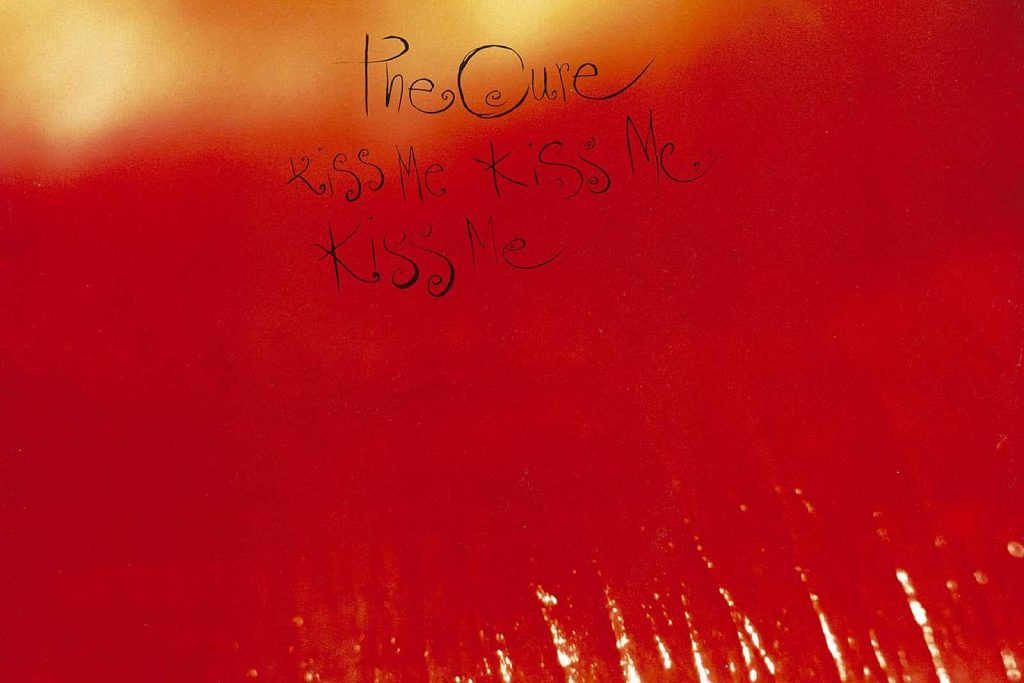 The lead-up to the Cure‘s seventh album, Kiss Me, Kiss Me, Kiss Me, released on May 25, 1987, wasn’t all that unexpected. The years and albums preceding the double-album release yielded signs for anyone paying attention – from the poppier, less-gloomy moments found on recent records to Robert Smith’s increasing ambition during the band’s eight-year recording career.

But there was still a sense of gratified surprise that greeted Kiss Me, Kiss Me, Kiss Me upon its release. There were times on 1985’s The Head on the Door that were more buoyant and exuberant than anything the Cure had put on an album up to that point. A handful of singles explored similar sunshine territory, but songs like “In Between Days” and “Close to Me” rarely turned up among the dusk-hued goth that represented LPs like Pornography and The Top earlier in the decade.

The exclamation points in “Hey You!” and “Hot Hot Hot!!!” were tip-offs the Cure had reached a new era, but confirmation came in the music: saxophones, blasting synths and Smith’s new, frank openness to pop melodies are heard throughout the album. There are still songs like “Torture” and “Shiver and Shake” here – the Cure would never abandon their dark, post-punk roots – but Kiss Me, Kiss Me, Kiss Me is their first real pop album.

In many ways, the 18 songs and 75-minute running time pointed the way to their future.

The Cure were on a commercial high when they entered the studio in 1986 to start work on the album. Not only was Head on the Door their highest-charting record in their native U.K. at the time, making it to No. 7, but it was also their first Top 100 entry in the U.S., where it peaked at No. 59. On top of that, a singles compilation – Standing on a Beach – released in May 1986 charted even higher on both continents.

Anticipation grew for the new album, more so than any of the band’s records at that time. That was thanks in part to alternative-rock radio, which was quickly expanding into a bold new market for artists who didn’t fit into the traditional playbooks. Encouraged by the success of Head on the Door and particularly its two radio-friendly singles, Smith shaped the Cure’s seventh album into a kitchen-sink mix of their distant and recent pasts: part post-punk delirium, part gothic brooding and part alt-rock brightness.

The lead single “Why Can’t I Be You?” serves as an invitation to this new turn for the Cure. Propelled by a zipping synth riff that moves along with more exhilaration than anything in the band’s previous catalog, the song all but dares its audience to hang on during the turn-clearing thrill ride. It was a long way from “The Hanging Garden.”

But it’s the album’s centerpiece track, the beaming “Just Like Heaven,” that finally gave the Cure their first Top 40 hit in the U.S. (albeit one that just peaked at No. 40). With no hidden agenda or metaphorical dark linings, the track lays itself bare on the surface as an unguarded love song that nearly trips over its breathless affirmation: Smith stumbles charmingly into the song’s beginning with an excited, too-much-for-words “Show me, show me, show me … .”

Here and there the Cure play with expectations: meeting them in “The Snakepit,” defying them in “Catch.” They’d streamline Kiss Me, Kiss Me, Kiss Me‘s grab-bag approach on later, single-LP albums – particularly 1989 breakthrough follow-up Disintegration – but the template is pretty much set here. And why not? The album was the Cure’s biggest at the time, logging the highest chart positions of their decade-long career.

There was more to come, of course, but the success of Kiss Me, Kiss Me, Kiss Me and “Just Like Heaven” opened a door for the band. “It’s the best pop song the Cure have ever done,” Smith told Blender in 2003, brushing away the preconceived notions anyone might have about the group’s goth reputation and priorities. This is where they belonged, he acknowledged, and there was no turning back.

Gloomy, gothy, punky, poppy – this multidimensional band’s albums are among the best of the era.