When Van Halen Released Only Non-LP B-Side, ‘Crossing Over’ 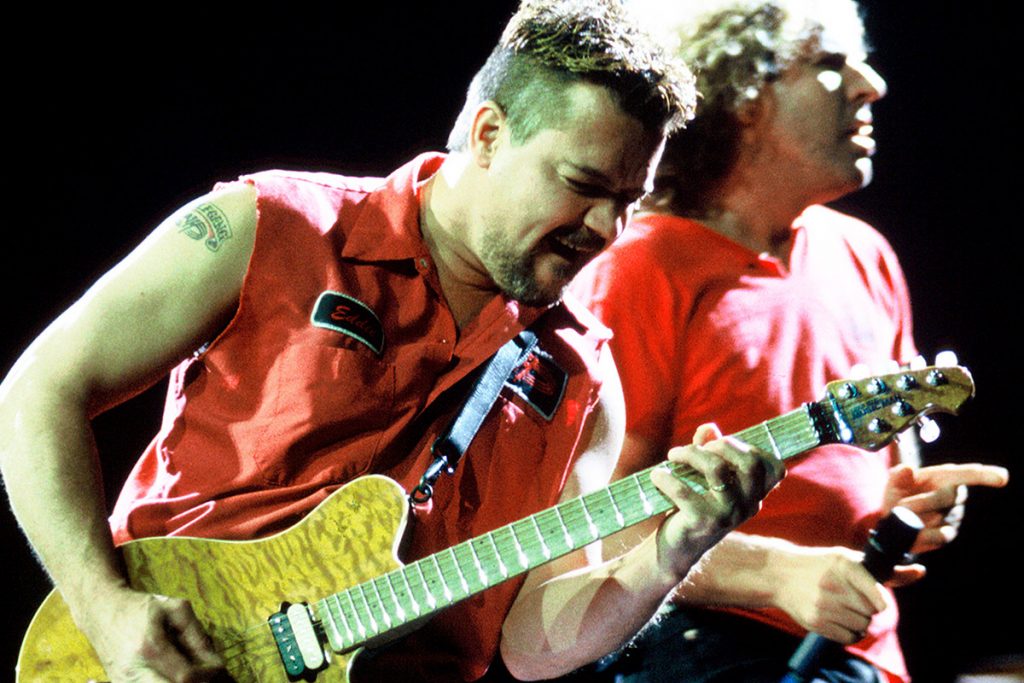 Approximately 60 singles have been globally released from Van Halen‘s 12 studio albums. Only one of them ever featured a previously unreleased track on the B-side.

Fans who flipped over “Can’t Stop Lovin’ You,” which was released on March 14, 1995, as the third single from the group’s Balance album, were treated to a new song called “Crossing Over.” It’s one of the most experimental tracks in the band’s catalog.

The roots of the song stretched back to 1983, when Eddie Van Halen demoed the track on his own, titling it “David’s Tune” for a friend who had taken his own life. The guitarist handled all the instruments, including drums and bass, and laid down some scratch lyrics. When Sammy Hagar joined the band in 1985, he was eager to flesh it out, but Van Halen rejected the invitation, and the track sat on the shelf for another decade.

Before the recording of Balance, Van Halen’s manager, Ed Leffler, died of cancer, so, in addition to thinking about the death of his own father, Hagar began mentally and lyrically considering the idea of what happens when a person dies and “crosses over” to the other side. According to Uncle Joe’s Record Guide, Eddie Van Halen caved and let the singer use the long-gestating music for what became “Crossing Over.”

Listen to Van Halen’s ‘Crossing Over’

Rather than redo the music entirely, the band left the original track with all of Eddie’s instrumentation and minimal vocals. But they remained in only the left channel. New music, with Alex Van Halen on drums and Hagar’s singing, panned across the music in stereo. But as interesting and distinctive as the song may have been, it was left off the album – at least in North America.

There was already a burgeoning controversy with the Balance cover art in Japan, because of its depiction of Siamese twin children on a seesaw. The artwork proved to be a stark reminder to residents of the country of conjoined Vietnamese twins Viet and Duc Nguyen, who were said to have experienced their birth deformity due to the usage of Agent Orange by the U.S. in the Vietnam War. The pair was separated with the explicit assistance of the Japanese Red Cross in 1988 in a highly publicized surgery.

Japanese consumers were so repulsed by the Balance cover art that it deeply affected sales. Warner Music Japan had anticipated some sort of reaction and had a backup image ready to go with just one child on the seesaw for pressings of the album in that country. Released one week later than the original import version, the Japanese edition quickly began to sell better than the U.S. pressing. It was one of the rare cases in Japan where the domestic outsold the import, as the region typically had difficulty selling CDs manufactured there because of the inflated price tag (Balance sold for approximately $4 more).

One of the methods Japan began using to move units of its homegrown products was to include some sort of bonus for fans. In the case of Balance, “Crossing Over” was tacked on to the end of the album, though it wasn’t indicated anywhere on the jacket or physical CD. Fans were clued in only by a sticker on the front and a Japanese insert card contained within the packaging. A similar move would occur when Van Halen released Best of Volume 1 the following year, with the Japanese edition including “Hot for Teacher” and shaving down one of the new tracks featuring David Lee Roth, “Can’t Get This Stuff No More,” to a radio edit. A sticker of the band logo was inserted into the package as well.

Van Halen’s U.S. fans soon caught wind of the bonus track found on the Japanese edition of Balance, leading many to scramble to get a copy, often for two times the cost or more of a traditional LP. So, the band decided to add “Crossing Over” as the B-side to the “Can’t Stop Lovin’ You” single, touting it as a “non-album track” on various configurations of the release worldwide.