Why Def Leppard Released ‘Bringin’ on the Heartbreak’ Twice 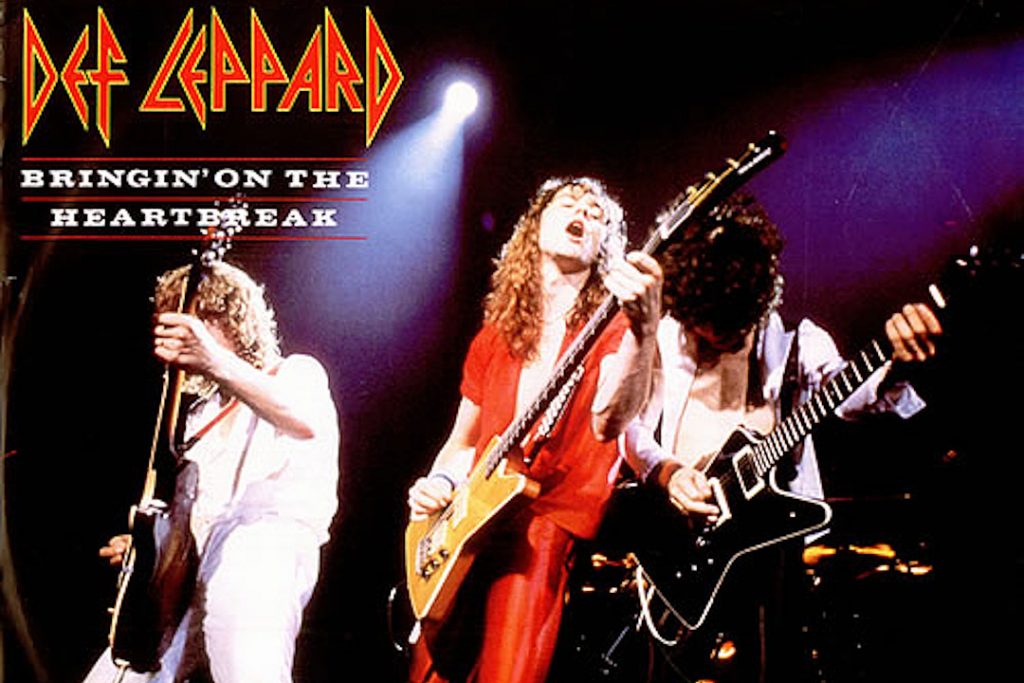 Pick your cliché for Def Leppard‘s “Bringin’ on the Heartbreak”: “If at first you don’t succeed” or “second time’s the charm.” Either is appropriate.

The power ballad from the British quintet’s second LP, High ‘n’ Dry, spent its first few years as an album track. It was the set’s second single but didn’t chart on either side of the pond. The performance video, however — initially shot for Don Kirshner’s Rock Concert — got some airplay on MTV during the channel’s burgeoning days, when it was clamoring for clips to telecast. That in turn helped drive High ‘n’ Dry to No. 38 on the Billboard 200.

“The [fledgling] MTV, having nothing to play, liked the idea of this young U.K. rock band, so they picked it up,” frontman Joe Elliott told Rolling Stone in 2016. “So six months, maybe a year after High ‘n’ Dry came out, we were making Pyromania and we started getting these telexes from the States saying, ‘Your album is selling 6,000, 7,000, 8,000 copies a week.’ Then it was 10, 15, 20,000 copies a week. It was heading toward platinum by the time we had Pyromania in the bag. Because of MTV, by 1982 the whole country was playing ‘Heartbreak.'”

Listen to the Original Version of ‘Bringin’ on the Heartbreak’

Fast forward to 1984, in the wake of Pyromania‘s massive success: Looking to capitalize further after that album’s six singles, executives at Mercury Records decided to re-release High ‘n’ Dry along with a lush, remixed version of “Bringin’ on the Heartache.” The single, accompanied by a new music video, reached No. 61 on the Billboard Hot 100 and notched the same position on the Canadian charts, giving High ‘n’ Dry a second lift that drove the album to double-platinum sales.

“Bringin’ on the Heartbreak” was written by frontman Elliott and guitarists Steve Clark and Pete Willis, recorded with producer Robert John “Mutt” Lange during the spring of 1981 at London’s Battery Studios. Def Leppard was coming off the Top 20 U.K. success of their 1990 debut, On Through the Night, and though Willis reportedly didn’t like the song because it was a ballad, the tune’s potential was evident during their next album’s sessions.

Listen to the 1984 Remix of ‘Bringin’ on the Heartbreak’

Lange, Elliott told Rolling Stone, “was the one who realized if we had a shot at radio it was with this song. So when we were recording the album, it was the one that got the most attention. I’d say for every hour we spent working on another song, we spent three or four on this one. And Mutt put me through the fucking mill singing the thing, because he wanted me to be accepted in the same league as a Paul Rodgers or a Lou Gramm or whoever. Meanwhile, I was just a young kid who was happy enough to be Ian Hunter!”

Def Leppard’s full-scale music video for the “Bringin’ on the Heartbreak” remix was filmed by David Mallet during February of 1984 at the Jacobs Biscuit Factory in Dublin, Ireland. Phil Collen had replaced Willis in the band by that point, miming his predecessor’s parts in the clip.

Interestingly, Mercury A&R rep and future band manager Cliff Burnstein reportedly theorized at the time that “Bringin’ on the Heartbreak” could be a big hit for another artist (Bonnie Tyler was mentioned specifically). So he, at least, may not have been surprised when Mariah Carey tackled the song for her 2002 album Charmbracelet. Produced by Randy Jackson, with a guitar solo by Dave Navarro of Jane’s Addiction, a mix of the single hit No. 5 on Billboard‘s Dance Club Songs while its music video was a takeoff on the 1979 Bette Midler film The Rose.

Listen to Mariah Carey’s ‘Bringin’ on the Heartbreak’