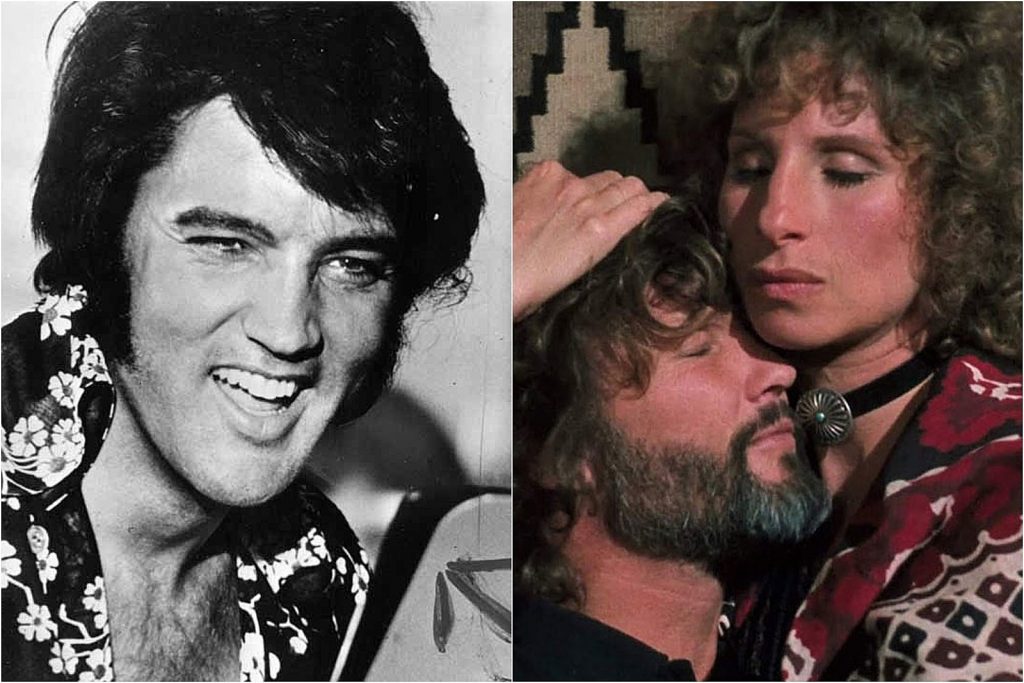 While its actresses (Janet Gaynor, Judy Garland, Barbra Streisand, Lady Gaga) have been big screen gold, A Star Is Born‘s multiple incarnations have also boasted an honor roll of leading men: Frederic March in the 1937 original, James Mason in 1954 and Bradley Cooper, who also directed the 2018 version.

Kris Kristofferson, meanwhile, won a Golden Globe for his performance as the declining rock star John Norman Howard — a role for which he owed thanks to Elvis Presley and, more specifically, Presley’s manager, Colonel Tom Parker.

Presley was co-producer Streisand’s first choice when she optioned rights for the film in the mid-70s. She presented the idea to him on March 28, 1974 while visiting Presley backstage after a performance at Las Vegas’ Caesars Palace, accompanied by her boyfriend Jon Peters, who would also be producing.

Presley aide-de-camp Joe Esposito wrote in his book Good Rockin’ Tonight that he and fellow Presley handler Jerry Schilling joined The King during his private meeting with Streisand and Peters — and that, after two hours of conversation, “he was hooked,” though he told Streisand he’d have to run it by Parker first. “But to the guys he was more enthusiastic. ‘I’m gonna do it!’ he vowed,” according to Esposito.

Presley biographer Peter Guralnick confirmed Presley’s interest, writing in Carless Love: The Unmaking of Elvis Presley that “Elvis was completely turned on by the meeting. He was excited by its subject (he knew the highly emotional 1954 picture well), he was pleased with the idea that Streisand would approach him in this manner, and he was proud of the way he had responded, flattering the Hollywood star just enough…He spoke excitedly about it for days to the guys.”

It was certainly attractive for The King. In 1974, he was in one of his career doldrums, his health in serious decline due to substance abuses. It had been two years since his last major hit, “Burning Love,” and he hadn’t made a feature film since 1969. Only the 1973 Aloha From Hawaii Via Satellite concert project ranked as an unqualified success.

The Colonel, however, wasn’t as excited by A Star is Born. He felt Presley, whom he still promoted as a superstar, would get second billing and be used to promote Streisand’s interests more than his own. He also questioned what expertise Peters, a hairdresser by trade, would bring to the film and doubted the couple would deliver on their promises to Presley. According to Esposito, The Colonel told his charge, “I guarantee you they’ll turn the contract down because I’m going to request top billing.”

He did that — and more, according to Guralnick. Warner Brothers and Streisand’s First Artists production company offered Presley $500,000 plus 10 percent of the net profits, and they would allow the Presley camp to produce and take the gate receipts from concerts that would be filmed for the picture. The filmmakers would retain rights to the music and soundtrack album. The Colonel’s counter was for a $1 million salary and 50 percent of the gross profits, $100,000 in expenses, approval on all of Presley’s songs and a piece of the soundtrack.

Within a month, the deal was dead. Esposito writes: “At the time figured that Barbra never intended to use Elvis anyway…I can’t imagine Elvis and Streisand lasting one week on set together…It was over with, and we never heard another word about it.”

Some in the Presley camp, according to Guralnick, “saw it as one more example of the old man (The Colonel) interfering…but secretly (Presley) seemed almost relieved not to have to deal with a matter that had blown up so quickly from a long-awaited dream into something complicated, unfamiliar and ambiguous all at the same…Streisand and Peters had thought they could take advantage of him; when they were confronted with the reality of the situation, that he had access to a strength and business acumen that they never imagined he would possess, they simply went away.”

Streisand and Peters had no cause for regrets, of course. Though her old friend Neil Diamond was briefly considered for the role, she and Kristofferson meshed well on screen, and the 1978 A Star is Born, made for $6 million, grossed $80 million and was the second highest-grossing film of 1976. It won five Golden Globes, including Best Motion Picture – Musical or Comedy and Best Actress in a Motion Picture – Musical or Comedy. The love theme “Evergreen” won the Academy Award and Golden Globe for Best Original Song and a Grammy for Song of the Year. The soundtrack album, meanwhile, spent six weeks at No. 1 on the Billboard 200 and was certified four-times platinum.

A lesser-known Bollywood take on the story, Aashiqui 2, came out in 2013. And the Cooper-Gaga A Star is Born was another global hit, with a $436 million global box office take and more Best Original Song Grammy and Golden Globe honors for the original “Shallow.”