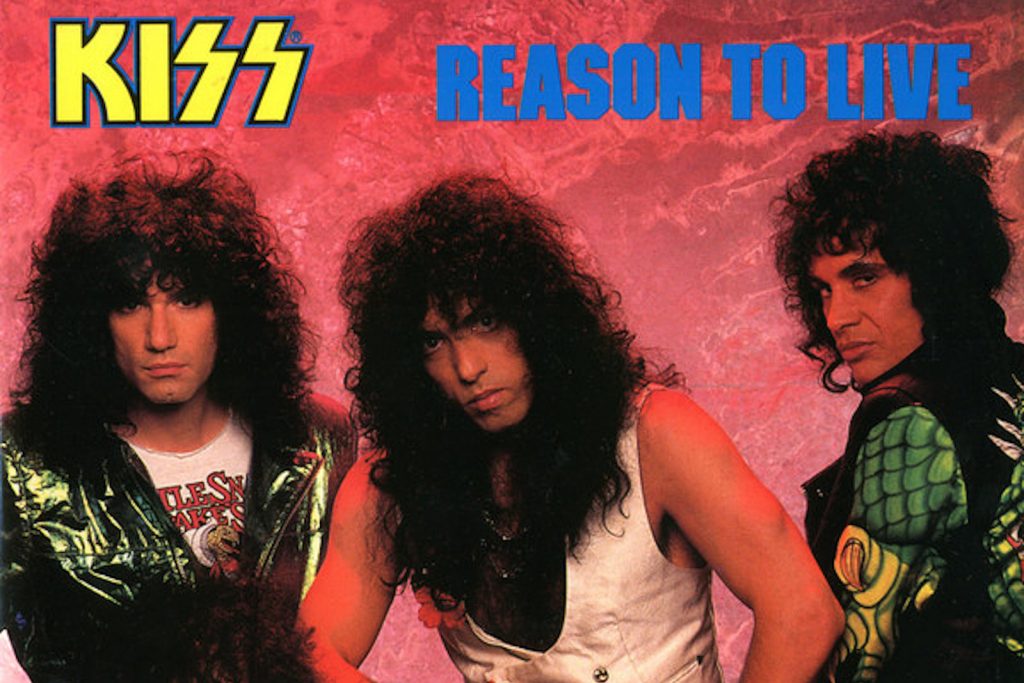 Kiss predicted big things from “Reason to Live,” the second single from their 1987 album Crazy Nights.

On one side of the pond, those expectations were met. The power ballad, co-written by the group’s Paul Stanley with hitmaker Desmond Child, became its most successful single ever in the U.K., soaring to No. 4.

But back home? Not so much. Released Nov. 12, 1987, “Reason to Live” peaked at No. 64 on the Billboard Hot 100 and No. 34 on the Mainstream Rock Songs chart, just slightly higher on each than its predecessor, “Crazy Crazy Nights.”

That was disappointing because “Reason to Live,” like all of the material on Crazy Nights, was engineered to be the kind of big, resurgent hit that ’70s AOR mates such as Aerosmith, Heart, Ozzy Osbourne and Jefferson Starship were experiencing at the time. Kiss hired Ron Nevison — hot off the Heart multi-platinum pair of Bad Animals and Heart, and Osbourne’s The Ultimate Sin — to produce. In addition to Child, who started working with Kiss on 1979’s Dynasty, the group also enlisted songwriting collaborators such as Diane Warren and Davitt Sigerson. The sound was big and glossy, as was the hair, and the videos were MTV-shiny.

“It was a new era, and we were trying to be part of it,” Stanley told this writer some years later. “So we got with the people who were having success at the game, like Desmond Child, Ron Nevison… I stand behind everything we did, even though, yeah, some of it wasn’t accepted as well as others.”

Listen to ‘Reason to Live’

It’s possible that “Reason to Live,” with a swelling arrangement not unlike Foreigner‘s 1984 smash “I Want to Know What Love Is,” might have been a bigger hit for another band. Kiss had gotten away with “Beth” 11 years prior, but core fans still part of the Kiss Army in 1987 did not want to hear that kind of song from the band — or, in fact, the keyboard wash that Nevison slipped into Crazy Nights. And unlike Heart and Aerosmith, which were crossing over to the pop charts during the ’70s, Kiss did not have enough established grounding with the pop audience (and radio) to court favor. To the masses, they were still the band that blew fire and spit blood and wore makeup years ago, not a player in the mid-’80s market.

In other words, damned if they do….

“I expected more out of ‘Reason to Live,'” Nevison, who considered the song “gorgeous,” told kissfaq.com. “To get a hit single in those days, you had to have some kind of ballad. There was no other way. I thought ‘Reason to Live’ was that ballad, and it did OK, but it didn’t quite catch on. I think there was still reluctance amongst [Top 40] radio stations… to play a song by Kiss. Not based on merit, but based on the fact that their listeners don’t listen to Kiss.

“Kiss was their own worst enemy as far as singles go. By ignoring pop radio for 20 years, you just don’t turn up and they let you on. By saying that we had keyboards, by saying, ‘We’re not selling out,’ you don’t work your way into those kind of radio spots… If we had a big hit, [Crazy Nights] would have sold another couple of million records. I thought ‘Reason to Live’ was the right single. It was a passionate, emotional song. It rocked a bit. It was perfect.”

While “Reason to Live” found little success at radio, Kiss did get some airplay for the song’s music video. Directed by Marty Callner (Aerosmith, Bon Jovi, Twisted Sister), it blends performance footage (with lead guitarist Bruce Kulick playing keyboards) with scenes of Stanley driving to the home of an estranged girlfriend (played by Playboy Playmate Eloise Broady), who pours gasoline on his Porsche 928 and sets it on fire. The good news is that the car survived and, in fact, was owned by Stanley — as a gift from bandmate Gene Simmons — until he sold it some years later.