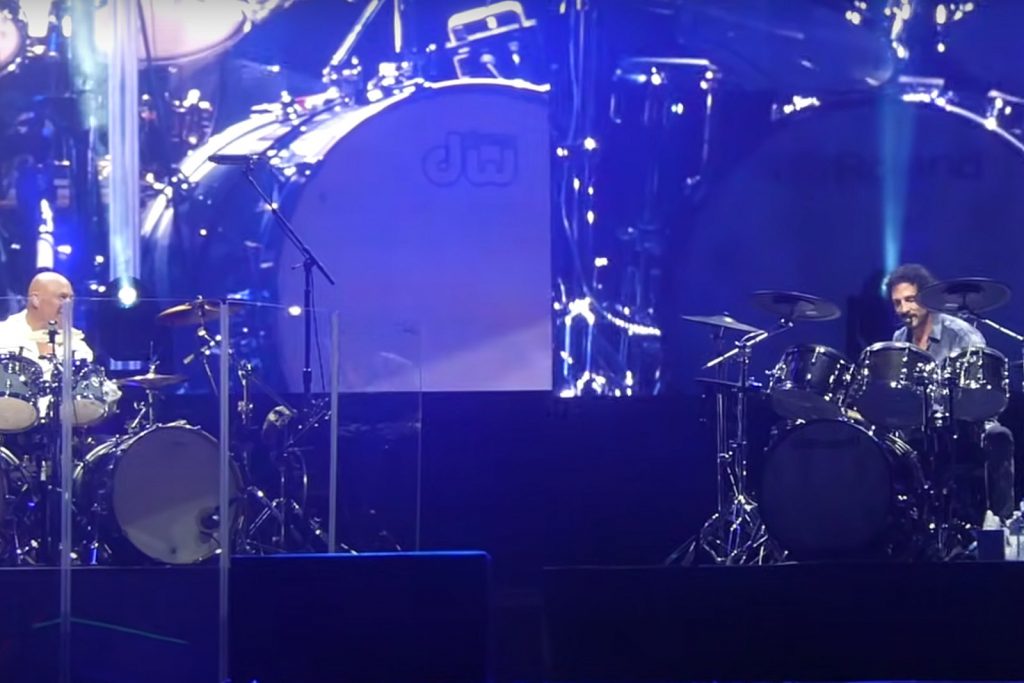 Journey have been in a state of evolution for the past several years, beginning with the 2020 departure of drummer Steve Smith and bassist Ross Valory.

They were initially replaced by drummer and producer Narada Michael Walden and bassist Randy Jackson, the latter of whom previously appeared on Journey’s Escape and Raised on Radio albums. They both appear alongside Neal Schon, Jonathan Cain and Arnel Pineda on the new studio album Freedom, which arrives on July 8.

But Journey’s lineup continued to shift once they returned to the stage in 2021. Bassist Marco Mendoza filled Jackson’s role in the live shows initially and later, Schon’s former Hardline bandmate Todd Jensen slipped in to replace Mendoza on bass. Former Journey drummer Deen Castronovo rejoined the band as well, playing with Walden for a short string of dates that featured both drummers.

Then Walden departed earlier this year. Cain told UCR that “he did a terrific job on the album, but it didn’t quite pan out.”

Castronovo is shedding a bit of additional light on the situation, telling us that Walden encountered unexpected health issues following a performance in Grantville, Pa., and decided to exit the lineup.

During a recent conversation, Castronovo also raved about the time that he got to spend working with Walden, and what he learned from the experience.

Let’s talk about how you found your way back to being a member of Journey again.
It was kind of bittersweet. My mother had passed away on July 19, and that was heavy. I was up all night with my family, talking and reminiscing. I went to bed about four in the morning. I got up to go to the bathroom and there was a text from Neal at like six in the morning. He was in Chicago. He goes, “Deeno, we need you to come out, if it’s possible, to work on some of these songs with Narada. It’s just two shows.” Narada was working on stuff and there were certain nuances that Neal wanted that he wasn’t quite capturing. He said, “Come on out and work with him. It’s just for two shows. Can you do it?” I said, “Well, can you give me a day? Mom just passed.” So he gave me a day and I ended up flying out. Oh, just walking into the room, dude, everybody was there. Of course, I’m tearing up and everybody’s tearing up because it had been so long. I got on the [electronic] ddrum kit and Narada was right across from me, and he was killing it! He sounds great! There were just little things that he wasn’t quite capturing, so I was helping him through those and showing him what we did. Then, we had to go back to Steve Smith’s playing on the Budokan [show] when they did the two records [Frontiers and Escape] in 2017. We were studying that along with my stuff and Neal goes, “You know what, let’s do a two drummer thing for these two shows. Instead of just showing Narada [these things], why don’t you both play?” We did the first show at the Aragon Ballroom and that was kind of the warmup. It went great. Of course, Lollapalooza was just unbelievable, being back there and playing with Narada.

Things just progressed [from there]. I remember being in the rehearsals though and I didn’t know – I just thought I was doing these two shows. Neal wrote and put something up, I think it was on Twitter, but he said, “Yeah, Deen’s back in the band.” I didn’t even know, dude! They didn’t even tell me this. They said nothing. I wake up with like 30 texts from everybody, “Oh dude, congratulations!” I’m like, “Well, it’s only for two shows?” “No, man, have you looked at Twitter?” I’m like, “No, I haven’t!” That’s when I saw it. I called Neal instantly and I said, “Is this for real, bro? Is THIS for real?” He goes, “Yeah, bro, we’re going to try this two-drummer thing and see how it works.” The rest is history. I mean, I’m here and I’m working and it’s just so nice to be back. That’s all I can say. I’m just grateful to Jesus every day.

Had you ever done the double drummer thing?
Never. That was the coolest thing because Narada had a real kit and I had the ddrum kit. To mold those two together – and we locked pretty damn tightly, for not really rehearsing very long. I think we only had five days when they brought me in. It came together so well. Narada has this feel, and I played a bit more straight. Narada’s playing just had this swing to it, so it’s something like me doing a loop and Narada playing over it. It was unbelievable. It really sounded great.

What was the most interesting thing about you playing with him?
You know, learning his pedigree. I knew he produced [a bunch of albums]. I had no idea he’d played with Mahavishnu Orchestra and all of that stuff. I just knew Narada Michael Walden – I mean, he was one of the greatest players of all time, [but] I only knew him for being a producer and doing Whitney Houston, Aretha Franklin and playing on those songs. I never really dug into his past. Once I got in the band and I was working with him, I made it a point to go back and look at his discography and listen to the stuff. He’s another guy, like Smith, they’re such iconic players and they have such an amazing gift. To listen to those guys and try to cop that feel – I mean, I’m a rock drummer. I play rock drums. That’s what I’ve done; that’s what I’ve always done. To hear that, it was like listening to Smith again. It was a lesson in humility, just with finesse, but powerful. He’s a powerful drummer. Narada is a badass, period.

I think it’s always valuable to be around guys like Narada who are such innovators and historians when it comes to what they do. There’s a value, getting to tap into that.
Oh yeah. You know, I’m a product of the late ‘70s and early ‘80s. There were great players in that time. You had Dave Weckl and stuff, but you saw guys like Smith and Narada, Tony Williams (of Miles Davis fame) and all of these amazing players. You know, for me, at a very young age, I listened to guys like Phil Collins when he was playing with Brand X. That was Phil Collins, man. The stuff you hear on the radio, he’s a great singer and a great drummer, but go back and listen to some Brand X, that will blow your mind. He’s a much better player than what you hear on the radio. So yeah, to get that perspective, you have to get out of your comfort zone and that’s what I had to do. I had to go back and listen to some of these players and just be floored, knowing where that stuff came from.

Why do you think things ultimately went a different direction as far as him not continuing with the band?
We were doing a show in Pennsylvania. He didn’t feel very good after the show. He actually had a mild heart attack after the show. All of us were scared. I remember just freaking out. It was like, “What the heck are we going to do?” He ended up staying there, and they fixed it really quickly, but I think for what Neal was looking for, he thought just keeping it as a five-piece would probably be the best thing. And I think Narada was at the same place. He’s got little kids, you know, he’s got new babies and stuff. He’s like, “You know, I need to be home.” I think that’s kind of what happened. They both mutually agreed. It’s like, “I’ve got to work on my health and I’ve got to take care of my family, and I’ve got to be there for my kids.” Let me put it this way, if that would have happened to me, that’s the first thing I would have said. “Yeah, I need to bow out. I need to take care of myself and I need to be there for my kids.

I like hearing that you looked at the Budokan gig when you started working with Narada. That was a special show.
Oh yeah, dude. The cool thing was that [Steve Smith], back in the ‘80s, he had this style. I was talking to Steve Toomey, my drum tech. We were going, “Well, how did he approach it?” He goes, “You know, when he came [back] in [the lineup], he said, ‘I don’t know what I was doing then. I was a different drummer then. I’m a different drummer now, so I’m going to approach them differently.” He added a lot of really cool stuff to the songs to make them more modern, I guess. Just new for him so it wasn’t just the same old stuff. Some of his parts on the songs [at the Budokan performance], I’ve picked up. I’m actually doing some of the stuff [that way] now. He just approached it differently. He completely changed them, and made them his own again! That’s the brilliance of Steve Smith. He’s just never satisfied with what he’s done. He’s always reaching, always searching and it’s a beautiful thing.

They played “La Raza del Sol” as one of the encores at Budokan, a B-side from the Escape era. Did you ever get to play that one with Journey?
You know, I did it. When we did the first DVD with Steve Augeri, we did it then. Actually, you know, I was playing at the top of my game at that point. I remember listening back to it and going, “Wow, I actually did alright on that!” – because I’m not a Latin player at all, but I did okay. I think you can see it on YouTube, but it was fun. That song, what a challenge! Neal was like, “Just do what you want to do. Just tear it up!” So I did what I could do and I think it came out great, but Smith is just [incredible], I mean, c’mon. He’s the man, dude. For me, nobody touches him. He can do anything, he can play anything and he will always be my favorite drummer of all time. He’s just the best of the best.

The Best Song From Every Journey Album

Singers may come, and singers most certainly may go, but some great songs remain.