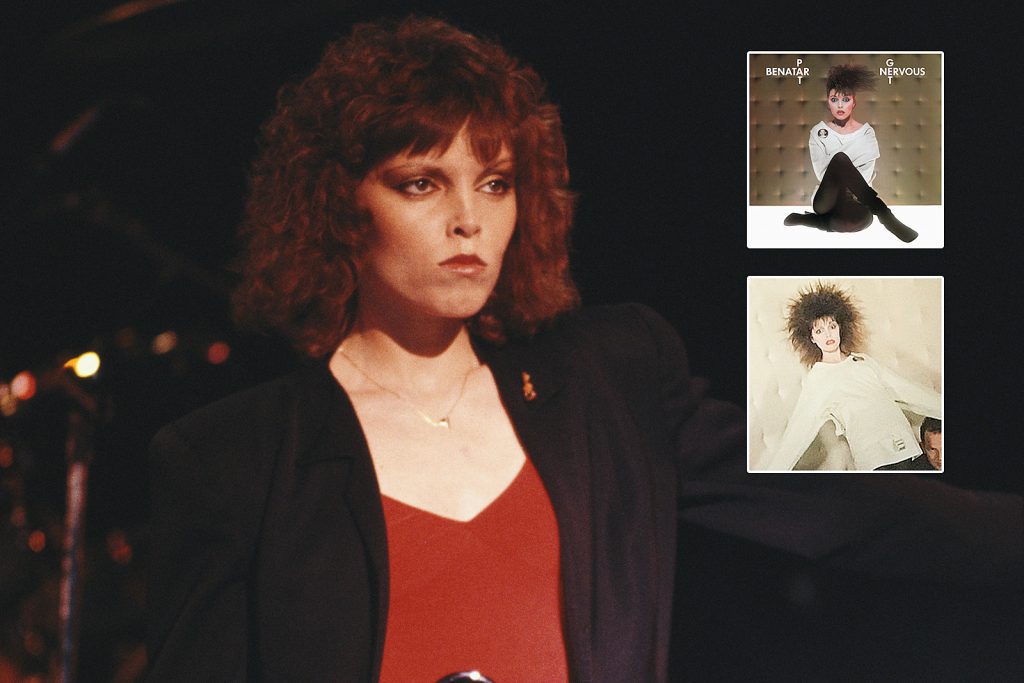 Pat Benatar isn’t known for being violent. She found herself angry enough to lash out, however, when Chrysalis Records overruled an attempt to escape from her glamorous image.

There’d been slow-building frustration with label boss Terry Ellis, who Benatar believed was incapable of thinking he could ever be wrong. “Chrysalis kept at me, and it seemed like they just never stopped – it was one thing after another,” Benatar wrote in her 2011 memoir Between a Heart and a Rock Place. “I came to call it ‘the gauntlet,’ because it felt like that was what I was running through. Every single day there was some new landmine I was dodging.”

Then Chrysalis moved to scrap her cover-art concept for Get Nervous before its release on Oct. 29, 1982. “I was made up to look anything but glamorous,” she recalled. “The photoshoot took place in a padded room. My hair was really wild, maniacal. I was wearing bright red eye shadow. I looked seriously insane, and we loved the effect.”

Ellis didn’t. “He called me at the studio and immediately launched into it: ‘What are you thinking? There’s no way I’m going to accept this.’” She responded: “Come on. It’s great – not to mention different. Can’t we just let loose for once, have some fun for a change?” The answer was “no.”

“I tried to explain to this man that I was sick of some people in the industry saying that my so-called ‘image’ was all I cared about,” Benatar continued. “I was sick of it myself, and this was a perfect opportunity to show some cheekiness. Continuing down the path of sex over substance would come back to bite us in the ass. It was more important to me to stay true to how I was feeling. I was done with the whole sex symbol thing. I wanted to go back to the original plan: playing rock ’n’ roll. That argument fell on deaf ears.”

Ellis arrived at the L.A. studio where the band was recording and the argument continued. Benatar became increasingly annoyed over the English businessman’s tone, which she described as “overly polite and condescending … the kind most people reserve for small children.” Realizing their argument was interrupting ongoing sessions for the album, they went out into the street.

“The only thing I could focus on was the thought that this guy was one of the most passive-aggressive men I’d ever known,” she wrote in Between a Heart and a Rock Place. “Did other major bands have to put up with this? Somehow I couldn’t see Sting or [Bruce] Springsteen having this conversation. What about Stevie Nicks or Ann Wilson? Was it only female artists going through this? I wanted to believe it was happening across the board, but I knew it wasn’t true.”

Ellis reminded her that he had the authority to shelve the album if the artwork wasn’t to his satisfaction. Then he launched into a tirade that led her to lose control. “I don’t know what it is with you American women. You’re all so beautiful but have such problems using your sexuality to your advantage. It’s so provincial.” Then he added: “I hope you don’t think people are actually coming to your concerts to listen to you sing.”

That was the trigger. “I let him have it, and God bless America, I slapped him,” Benatar said. “Right there on Glenoaks Boulevard. That was just too much. Not only had he insulted me on a personal level, but he was doing that patronizing European crap about us ‘Yanks.’ He’d taken this fight to the street, and it had ended up in the gutter. I am not a violent person – that’s just how mad I was.”

Even more surprising was Ellis’ reaction: After a moment of shock when he looked like “someone had just dropped a bucket of water on his head,” Ellis simply pretended it hadn’t happened, and continued with his lecturing tone. “And his message remained the same,” Benatar added. “Either shoot the cover over, or there would be no album.”

Benatar had no choice but to make changes. She toned down the cover image while leaving a band picture on the back cover to hint at her original intention. But that was only after an incredulous Benatar was moved to ask manager Rick Newman if she had slapped Ellis in public.

“‘Oh, yes, you slapped his face all right,’ Newman said matter-of-factly. But there was nothing matter-of-fact about how Newman felt about it,” Benatar said. “Outwardly, my manager was not happy with these developments. He saw the label as the power brokers, the people he depended upon. He couldn’t have me going around and hitting them in the face.

“However, secretly I knew that Newman was pleased that I’d given Terry something that had been a long time coming,” Benatar concluded. “Just as I was tired of being pushed around, Newman was tired of being in the middle.” She added: “We both got some satisfaction from knowing that, for at least an afternoon, Terry had been put in his place.”

Six albums reached platinum sales or better as Pat Benatar built a Rock & Roll Hall of Fame career. But which one topped them all?