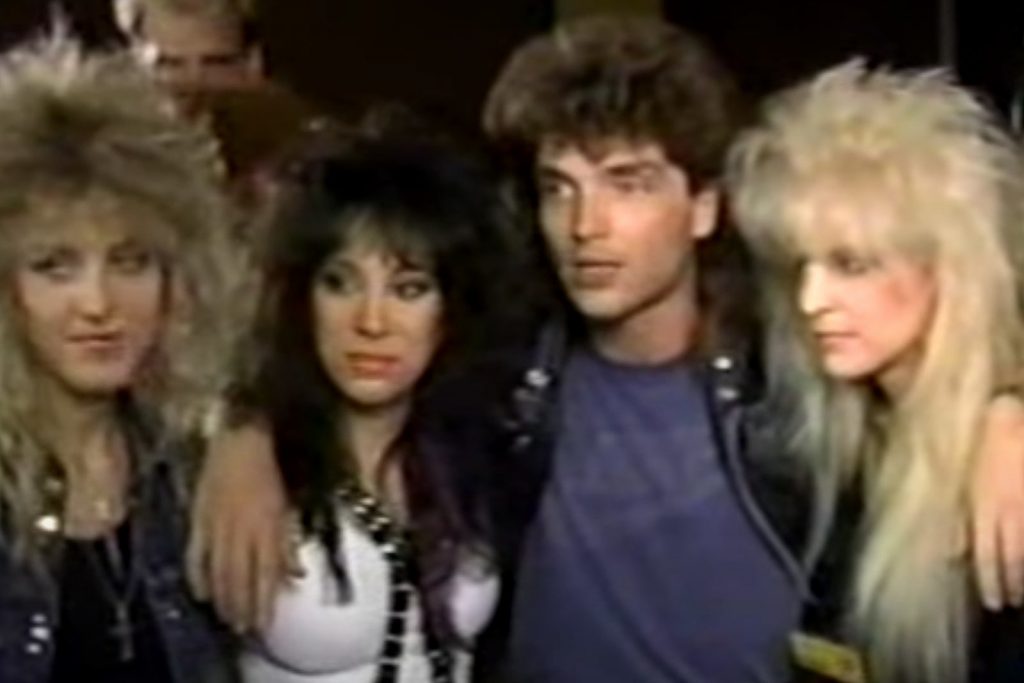 There was a reason Richard Marx flashed across the screen during the video for Vixen‘s breakout 1988 single “Edge of a Broken Heart.” He co-wrote the song with Fee Waybill, frontman for the Tubes; Marx also co-produced and played keyboards on the track.

That helped Vixen to their highest-ever spot on the Billboard charts, as this power ballad hit No. 26. The follow up from their gold-selling self-titled debut, “Cryin’,” was also a Top 40 hit, but Vixen will likely always be most associated with their first single.

Marx, who just released Stories to Tell: A Memoir, joined us for an exclusive interview to discuss how he and the always-creative Waybill created the song, their enduring friendship, and whether he regrets not keeping “Edge of a Broken Heart.”

Vixen’s “Edge of a Broken Heart” has always seemed like a hell of a song to give away. What sort of remorse did you have?
I’ve never had remorse in those circumstances, even then. In the case of “Edge of a Broken Heart,” I wrote that song in a heartbeat. I had to. I had to write it really fast. I wrote the music so fast in a hotel room, and I take way longer to write lyrics. I called Fee Waybill, who is not only my best friend, but one of the greatest lyricists of all time. I said, “You’ve got to rein in your weirdness on this one. It needs to be way more commercial. You can’t use words like ‘perfunctory.’” [Laughs.] Fee throws words into his songs that are so cool! But it’s so not commercial.

He understood the mission and he fuckin’ nailed that lyric overnight. I ran in to produce the record and as that song came to life, I knew it was really good and I was so proud of it. But I wrote it for them; I never even thought about it for me. I’ve never had that thought, “Oh shit, I shouldn’t have given that song away,” because the mission was to deliver them that song.

Plus, if you think about it, I benefited from it anyway, because I put it in my live show and I started closing my concerts with it. When it became a hit for them, I would put it in my show. What was funny was that most of the audience, they didn’t read liner notes, so they were like, “Why is he covering a Vixen song?” They didn’t know that I wrote it! [Laughs.]

It doesn’t sound like the guy from the Tubes and Richard Marx wrote a song for Vixen. You both are really good at being shapeshifters creatively. What was most surprising to you about Fee when you met the guy behind the Tubes persona?
First of all, how incredibly bright and well read he is and always has been. He’s a poet. I kind of had a sense that he was going to be funny because his whole stage persona, this is a guy who does not take himself too seriously – or anyone else seriously. He doesn’t give a shit who you are: He’ll bust your balls all day long. I like people like that. Fee has been a stabilizer in my life. I was so lucky to become close to Fee before my career took off. I was really just a songwriter who he wrote a song with for his solo album – years before my first album.

It was writing with him for his Read My Lips album – which is a great album, I think – that cemented our friendship, but also our collaborative relationship. I just remember thinking, “This is easy. I write the music and he writes great lyrics.” We started just writing together. When I got my record deal, there was no question I wanted to write with Fee and have him sing, because I love his voice.

Look, when I met Fee, I was just a massive Tubes fan. To think that the guy from the Tubes would not only become my friend, but my son’s godfather and frequent collaborator, is awesome. So much of Fee, the depth of Fee, was a surprise. Anybody that spends a little time with him, you’ll go, “Oh yeah, there’s many layers to this guy.”

Listen to Richard Marx Perform ‘Edge of a Broken Heart’

This is true of all of these people and, to a degree, it still exists in me but I remember being in my apartment in Westwood, Calif., waiting for Fee to arrive to write that song, which was called “Who Loves Ya Baby.” I already had an idea. I had a little bit of an idea going, but I was nervous and I remember thinking, “I just want him to like this idea. I want to write a great song that he wants to record.”

It was so fun and effortless. Immediately, I started singing stuff and he was like, “Oh yeah, I like that! That’s cool! Wait, sing it again!” And that’s the way it has always been. Once in a while, I’ll start working on something with Fee and he’ll go, [Marx inhales sharply] “I don’t know, Ricky! I don’t know!” When you have that freedom to be yourself and to not be polite – there have been times when I’ve said to him, “Dude, you can’t sing that lyric. You’ve got to change that word. I can’t sing sphincter in this ballad. I’m sorry!”