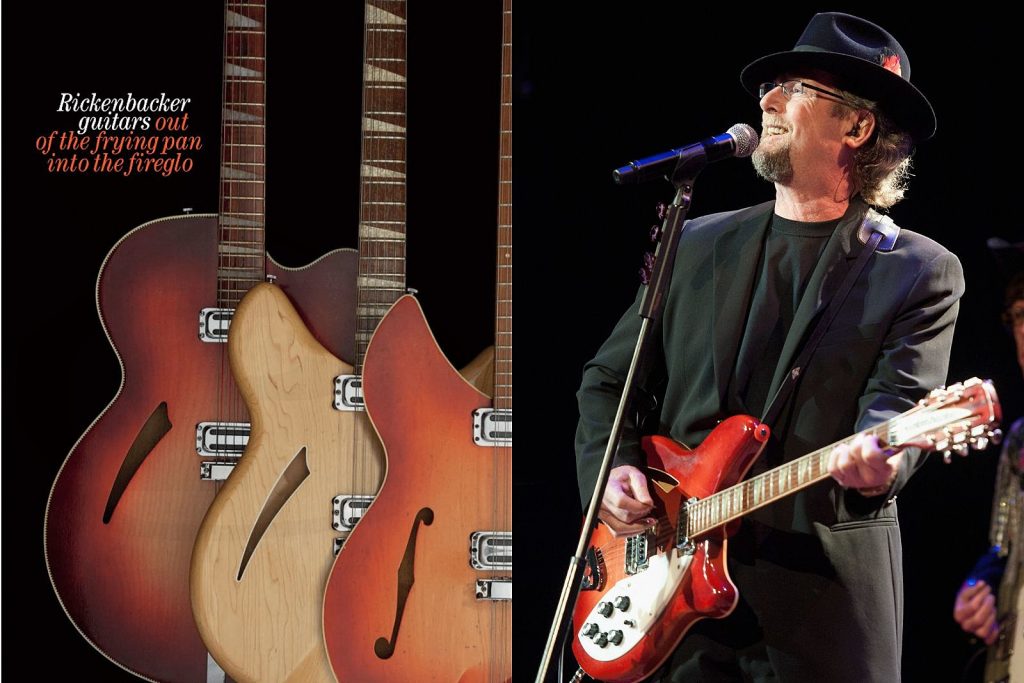 As the Byrds declared in 1967, if you want to be a rock ‘n’ roll star, “Just get an electric guitar, then take some time and learn how to play.”

For many aspiring artists in the ’60s, the electric guitar of choice was a Rickenbacker, which the Beatles popularized with their appearance on The Ed Sullivan Show. John Lennon had a Rickenbacker slung across his body in 1964; George Harrison frequently used one on tour, too, effectively cementing the Rickenbacker as the guitar for aspiring rockers. Since then, few instruments have held such an iconic foothold in the history of rock music as the Rickenbacker guitar. It’s instantly recognizable to seasoned musicians and casual fans, thanks to its distinct shape and burning Fireglo finish.

The Rickenbacker had a fascinating history before the Beatles, as chronicled in the recently released book Rickenbacker Guitars: Out of the Frying Pan Into the Fireglo by Martin and Paul Kelly. (The pair also authored 2010’s Fender: The Golden Age 1946-1970.) The evolution of the instrument, from initial design blueprints to its place on the international rock ‘n’ roll stage, is chronicled inside the book.

“Electronic music and popular culture evolved simultaneously and that’s something that has always fascinated me — how technology enabled musicians and how the musicians helped to drive that technology forward,” Martin Kelly tells UCR. “It changed our world. Cramming 90 years of history into a 330-page book was certainly a challenge, but I’m pleased with how it turned out.”

Out of the Frying Pan Into the Fireglo also includes sections devoted to artists who brought the sight and sound of Rickenbackers to the wider public, like Lennon and Harrison, but also Tom Petty, Paul Weller, Susanna Hoffs, Johnny Marr, Geddy Lee, Peter Buck and probably the instrument’s biggest fan, Roger McGuinn. The Byrds co-founder first saw Rickenbackers used by the Beatles in A Hard Day’s Night. He’d seen the movie with his bandmates, all of whom became enamored with the idea of becoming bona fide rock ‘n’ roll musicians.

“When we came out of the theater, David Crosby was swinging around a light pole like Gene Kelly in Singin’ in the Rain saying, ‘This is what I wanna do, this is great!’” McGuinn recalls in the book. At the time, Gibson and Fender were the most popular brands available; Rickenbacker was still fairly obscure, but Harrison’s 12-string, in particular, caught McGuinn’s attention. “George used it in a really cool way – he played melody lines up and down the G string. I thought that was really effective, a great sound.”

McGuinn traded a couple of other guitars for his first Rickenbacker and he was smitten from the get-go. “Tim Dixon, our first manager asked me to describe the sound of it,” McGuinn tells UCR. “And I said it’s like a uranium isotope in a ball of butterscotch.”

With McGuinn’s help, the guitar went from a fairly obscure American brand to a coveted instrument worldwide. McGuinn frequently used his 12-string Rickenbacker on Byrds songs, lending an air of light, airy charm to classics like “Mr. Tambourine Man,” “Eight Miles High” and “Turn! Turn! Turn!” Within a few years, it would be difficult to detach the sound of Laurel Canyon folk rock from the jangle of a 12-string Rickenbacker.

The Beatles’ influence would come full circle in 1965. Harrison’s Rubber Soul track “If I Needed Someone” was, as McGuinn was made aware by Beatles publicist Derek Taylor, directly inspired by the Byrds’ “The Bells of Rhymney.”

“We all lived in Laurel Canyon and [Taylor] came over to my house with this reel-to-reel tape … a little three-inch reel of tape,” McGuinn remembers. “And he said ‘George wants you to know that he wrote this song based on your lick in ‘Bells of Rhymney.” … I couldn’t believe it. It was such an honor.”

Listen to the Byrds’ ‘The Bells of Rhymney’

Years later, the pair would spend time together at Harrison’s Friar Park estate, where Harrison brought out the same Rickenbacker he used on A Hard Day’s Night.

In a lot of ways, Kelly says, the visibility of the Rickenbacker – on TV or famous album covers, like Petty’s Damn the Torpedoes — is a huge reason the instrument has stuck around. “Player association has been a huge part of Rickenbacker’s success and longevity. When it comes to rock ’n’ roll and pop culture, image is everything,” he says, noting that after the Beatles’ appearance on The Ed Sullivan Show, Rickenbacker CEO F.C. Hall was savvy enough to travel to New York to meet the band and supply them with more instruments.

“[McGuinn] was the first American player to really put Rickenbacker on the map, and his endorsement lead to Mike Campbell and Tom Petty choosing Ricks,” Kelly says. “The baton still gets passed on from the likes of Radiohead to younger players like Laura Jane Grace from Against Me!“

For guitar aficionados, there’s plenty of technical talk in Out of the Frying Pan Into the Fireglo, but the book isn’t just for gear geeks. “You don’t need to be a painter to appreciate art, and you don’t need to be a guitarist to enjoy the Rickenbacker book,” Kelly notes. “As objects, Rickenbacker guitars are works of art, but the book is as much about the music and the musicians who played them as the guitars themselves.”