Why Sammy Hagar Isn’t Playing Guitar on His New Album 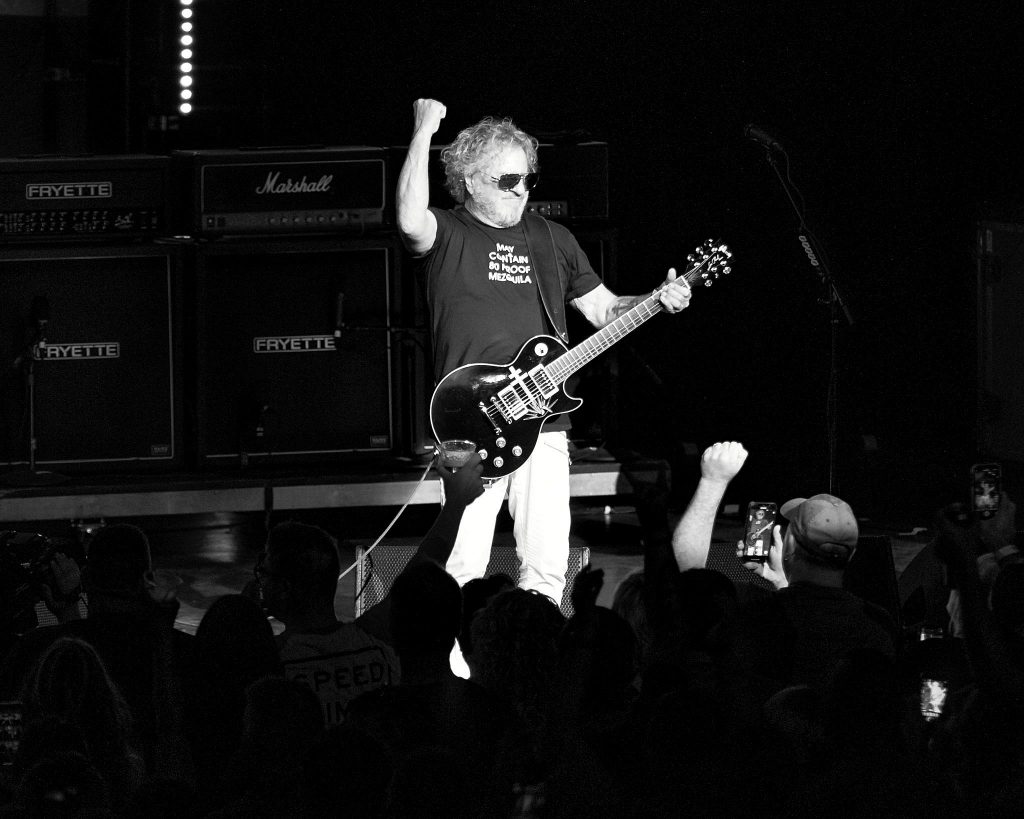 Sammy Hagar has significant chops as a guitar player. After all, this is the guy who wasn’t afraid to square off against Eddie Van Halen.

As sessions began for Crazy Times, however, producer Dave Cobb encouraged Hagar to focus on one role: “You don’t need to play guitar. You’re the fuckin’ singer,” he told the former Van Halen frontman. “I want you to concentrate.”

Ground rules like that helped to birth one of the most focused albums that Hagar has made in recent memory, on par with his best moments with Chickenfoot and the glory years with Van Halen and Montrose.

During a wide-ranging conversation backstage at a recent tour stop, Hagar dug through a number of topics, including writing a song with Eddie Van Halen in a dream – and how former Van Halen producer Ted Templeman contributed to the sound of this new album.

He also discussed the creative process that went into his 19th studio record and third with the Circle, in advance of the album’s release this week.

Listen to ‘Crazy Times’ by Sammy Hagar and the Circle

This feels like one of the heavier albums you’ve done in a while.
I think it is. I think that was [Dave] Cobb’s intention. You know, I wanted to do an acoustic, Americana kind of record. Everybody knows that. I don’t know why I wanted to do that. I think I wanted to do that because it’s who I really am – and at my age, it’s easier to do that kind of music and settle down a little bit and stop trying to be the fuckin’ Red Rocker still. [Laughs.] But I can’t help it. When you’ve got Jason Bonham, Michael Anthony and Vic Johnson playing with me, I mean, when they kick in on a song, you can’t be too mellow. I didn’t want to be really mellow; I just wanted to be Americana and write those kinds of lyrics, with more stories. I did that anyway, but the stories came from COVID.

After COVID, the stories were kind of dark and kind of negative. I lost my optimism, to be honest with you. I’m a very optimistic guy, but I don’t really feel good about what’s going on in this country and the whole world. I just kind of wrote about how I feel about what I see. Every now and then, I take a break with something like “Funky Feng Shui,” because that’s what I also see too. I see some fuckin’ beautiful chick walking a big dog. He takes a big shit and she puts on a fuckin’ glove and picks up that shit. To me, that’s one of the funniest things that ever happened on this planet. I mean, I’d rather people do pick up the shit, but in the old days, nobody did that. The girl would be looking the other way and say, “Okay, c’mon,” and leave a big pile of shit. But anyway, that’s some funky feng shui. So I do still have a sense of humor.

Listen to ‘Funky Feng Shui’ by Sammy Hagar and the Circle

How did Dave push you as the producer?
[With] “Slow Drain,” Dave Cobb was saying, “I want to hear that hungry kid that I heard in Montrose,” because he’s a fan, you know? He said, “I became a huge fan with Standing Hampton in 1982 and I followed you through Van Halen. I went back and listened to the Montrose stuff and became a fan.” When he called to say, “I want to work with you,” he said, “That’s what I wanted from you. I wanted the Sammy Hagar that I want.” I said, “Brother, you can come get it!” [Laughs.] I said, “I’ve still got all of the fire and everything, somebody just needs to kick me in the balls a little bit.” He pushed the fuck out of me, but more than doing that, he got the whole band in there.

He picked up a guitar and said, “You don’t need to play guitar. You’re the fuckin’ singer. I want you to concentrate” – because whenever I made records before, I just put the guitar parts down first and then I’d go in and sing the vocals to the whole track by myself. And it’s always like, “Mmmm, this is a little bit fucked up.” I’m sitting here by myself singing, with everybody sitting there gawking. So to sing with the band every time, we did 25 or 30 takes – whatever it took until he thought he got every vocal lick from me, everything from Jason, everything from Mikey. The only thing we overdubbed were the background vocals. That’s why the album feels like it does.

I know you did some of this with Chickenfoot, but recording live suits this band really well.
Better than any band. Chickenfoot, we did it too, but Joe [Satriani] is such a stickler about every note he plays. He plays so fast sometimes and he’d say, “Nah, I hit a bad note.” “You hit a bad note?” [Hagar imitates the ridiculously fast section of playing.] “Oh, that one!” So a lot of times, it didn’t become live. A lot of my vocals were live, but then when the guitarist changes his part – like what Eddie would do too all of the time. He’d go back and redo his part. I’d go, “Well, fuck, now I’ve got to re-sing it, because it doesn’t sound right against what you’re playing now.” But you know, Van Halen did some live stuff. Montrose, all live. [Laughs.] Chickenfoot, there’s quite a few live vocals in there. But this is 100% live vocals, except for “Slow Drain” and “Pump It Up.”

Listen to ‘Pump It Up’ by Sammy Hagar and the Circle

“Childhood’s End” has a very proggy feel to it. Are you a prog guy?
To the bone. If you listen to my [second solo] album, the song, “Red,” it’s got all of these changes. It goes through all of these [moments]. I’m a prog guy. I have a hard time simplifying things. I like to keep going. They say, “Well, you don’t need all of those parts” and I’m going, “Yeah, I do!” I’m a Pink Floyd nut. To me, my favorite band in the world ever has got to be Pink Floyd – and maybe Tool. Two dark, weird-ass bands. The reason why I like dark, weird-ass shit is because normally, I don’t think like that. But on “Childhood’s End,” I was sitting with an acoustic guitar and I wrote that whole song on acoustic guitar. I was singing it and the lyrics were just coming to me, these dark images. I thought, “It’s childhood’s end.” The fuckin’ planet Earth, we are grown up now. There are no more kids left on this planet.

It’s like, wake up, motherfuckers, because the fuckin’ shit has changed. I just related it to kids. It’s like, when you’re a teenager and all of the sudden you realize you’re not a kid anymore. Now, you’ve got to get a job. It’s tough. I mean, nowadays, for a kid in that position. That song is the deepest song I’ve ever written. It’s deeper than “Father Time.” [That song] is about me. But “Childhood’s End” is about the shit. I think [“Childhood’s End”] is a real important song. I don’t know what we’ll ever do with it, if it will ever get played anywhere. But it’s a motherfuckin’ masterpiece. You listen to those lyrics, man, I outdid myself. That’s automatic writing. When I write lyrics like that – I just made them up. I was sitting with an acoustic guitar and I just started singing the shit. I did it for about 20 minutes and I went back and went, “That line’s good; that one’s good.” I wrote it all down and had the lyrics. I mean, it wasn’t like I had to sit at home and go, “Oh, gee, what do I say now?” No, the fuckin’ shit came out.

I know you’ve said Dave Cobb didn’t want to make an Americana album with you, but listening to things like “Be Still” and “Father Time,” that spirit is in there.
100%, especially the intro version of “Childhood’s End.” You know, “Beginning of the End,” “Childhood’s End” has got Americana in it. It’s a story. It’s like, “Bye, bye, American Pie.” [Laughs.] I feel like I got it done lyrically. The most important lyric, I think, on this record, is “Feed Your Head.” People have to realize if you think that your children are going to be able to go to work at the factory you went to work at, you’re crazy. Right now, those factories are going to have five people where they used to have 5,000. Five people can do the same job now with the automation and all of that stuff.

You’ve got to be careful, you’ve got to feed your head and figure out what you’re going to do and how you’re going to do it. The big machine is broken down, man. Like I said, I’ve never been so un-optimistic in my life. That glass is upside down, man. We’re going into some really hard times. So us people that can help and do what we can do and make changes and give people some good advice need to step up and start doing that and stop being fuckin’ selfish. This world has got to stop being selfish and everybody out for their fuckin’ selves. You’ve got to start thinkin’ about your brothers and sisters.