Why Slash Gave Lenny Kravitz ‘Always on the Run’ 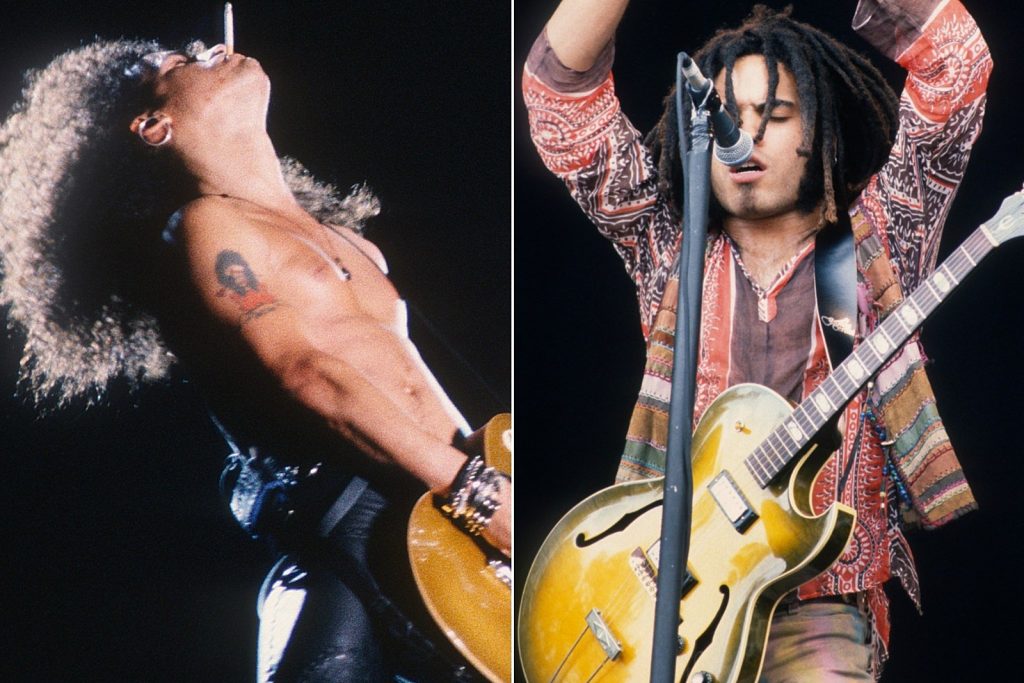 Lenny Kravitz and Slash banged out “Always on the Run” during a whirlwind, daylong jam session, but depending on whom you ask — and when you ask them — Kravitz might have another Guns N’ Roses alum to thank for the track: ex-drummer Steven Adler.

The singer and guitarist had made modest waves with his 1989 debut Let Love Rule, a savvy combination of rock, funk and soul that peaked at No. 61 on the Billboard 200. In January 1990, Kravitz attended the American Music Awards, where Guns N’ Roses were being honored for Favorite Heavy Metal/Hard Rock Artist and Album (for Appetite for Destruction), and realized he recognized their top-hatted lead guitarist from more than just MTV.

“Slash and I went to high school together, but we hadn’t seen each other since,” Kravitz told MusicRadar in 2019. “When my first album was out, I went to the American Music Awards and Guns N’ Roses were getting awards, and they were sitting in front of me. He and I just kept looking at each other like, ‘I know you.’ Not ‘I know that you’re Lenny Kravitz and you’re Slash’ — but, like, ‘I know you.'”

The two caught up, and Kravitz invited Slash to the studio to play a solo on “Fields of Joy,” which would open his 1991 sophomore LP, Mama Said. (“It was a one-take solo, and he wanted to play it over again, but I wouldn’t let him,” Kravitz told MusicRadar. “I always love first takes.”) With the creative juices still flowing, they decided to write a new song as well.

Listen to Lenny Kravitz and Slash’s ‘Always on the Run’

“[Slash] was on tour in Europe,” Kravitz told Rolling Stone in 2018. “After the last date, he jumped on the Concorde and flew from London to New York at nine in the morning. He had me get a gallon of vodka and a bag of ice, and we went in the studio, and bang, there it was. The two of us wrote and cut the tune. I played drums; he played guitar. Then I played my guitar, bass and did the vocals. I brought the horn players in, and it was done. Then he got on a plane the next morning and went to L.A. It was a wild day.”

With its slinky riffs, muscular grooves and tasty guitar solo, “Always on the Run” recalls the vintage blues-rock that made up the bulk of Appetite, and which Guns N’ Roses would begin to abandon on 1991’s twin Use Your Illusion albums. Slash intimated in a 1993 Swedish television interview that he had presented “Always on the Run” to GNR first, but they never ran with it because of the technical limitations of Adler, who was fired in 1990 for failing to control his drug addiction.

“I spend the bulk of my time writing material that’s focused towards Guns N’ Roses, but there’s some songs that we just ended up not doing,” Slash said. “And so I just go record ’em with someone else. I remember when Steven was still in the band, he couldn’t play certain songs. There were certain songs that didn’t make the record that I recorded with other people. And Axl [Rose] and Duff [McKagan] were like, ‘Why did you do that?’ I was like, ”Cause Steve couldn’t play ’em.’ Then we got a new drummer and we could’ve played ’em. Especially the Lenny Kravitz tune. But I’m happy I did it with Lenny, ’cause Lenny’s great, and I’m glad the way that turned out.”

Out of the mouth of babes comes truth, but years later, Slash offered a different reason for giving “Always on the Run” to Kravitz. “I don’t recall ever saying that,” he told The Guardian in 2019 of the Adler dilemma. “It was a riff that I came up with that I didn’t present [to] Guns N’ Roses because it didn’t seem appropriate.” Slash said Kravitz had heard him playing the riff and simply asked if he could use it on Mama Said: “It was a free piece of property, so …”

Kravitz released “Always on the Run” as the lead single off Mama Said on March 8, 1991. It peaked at No. 8 on Billboard’s Modern Rock Tracks chart and became a concert staple for Kravitz, ranking as his third-most-played song ever, according to setlist.fm. The guitarist played it with GNR during a June 1992 concert in Paris on the massive Use Your Illusion tour, a power-packed show that also saw cameos from Steven Tyler and Joe Perry.

Speaking of Aerosmith: “Always on the Run” reached a new audience when it was featured in the 2008 video game Guitar Hero: Aerosmith. Slash, too, revived the song on his 2022 tour with Myles Kennedy and the Conspirators, proving that even a “spontaneous fuckin’ thing” can bear fruit for decades.

The top-hatted guitarist has kept busy outside of Guns N’ Roses and Velvet Revolver.