Why ‘The Bionic Woman’ Outshines ‘The Six Million Dollar Man’ 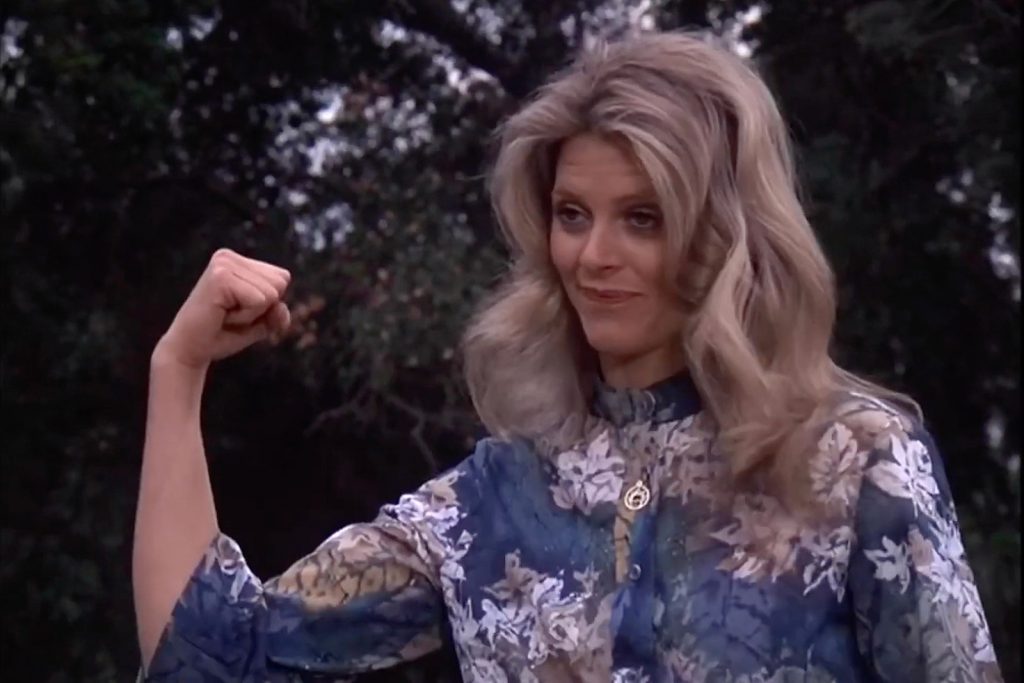 Premiering on Jan. 14, 1976, The Bionic Woman was the rare spin-off that outshone its parent show.

The process by which it originated was organic by television-industry standards. ABC’s The Six Million Dollar Man, the episodic drama centered on astronaut-turned-bionic-spy Steve Austin, was in the middle of its second season. Producer Harve Bennett “needed some scripts in a hurry,” claimed Kenneth Johnson, a man who’d studied classical drama in college and was waiting to get his ideas out.

Johnson ended up writing one of those quick scripts. This teleplay, for a two-parter called “The Bionic Woman,” ended up kickstarting his television career in many ways. Besides being a formidable episode by itself, it introduced TV audiences to Lindsay Wagner as Jaime Sommers, the hero who would become the Bionic Woman.

The episode takes Steve Austin back to his hometown, where he reconnects with Jaime over pizza, canoeing and horse rides. Outside of the cold open, the first part of the episode largely avoids action in favor of legitimizing the romance, which faces tragedy when Jaime ends up in a skydiving accident that threatens to kill her. Johnson’s script takes Steve far beyond his familiar cool-and-collected vibe, as he begs for the help of his boss, Office of Scientific Intelligence director Oscar Goldman. The two decide to give her the same bionic parts that saved Steve’s life.

Johnson’s decision to foreground the emotional lives of the characters made for a fitting introduction. To him, it was important for the human element to remain intact in all of his shows — as he told Den of Geek in 2008, “something working underneath the surface, a substantive layer underneath the commercial appeal.” The second part of the episode presents Steve and Jaime’s relationship getting deeper, to the point of marriage,  ultimately ending with her succumbing to the incompatibility of her bionic elements and dying.

Wagner joked to Tulsa World in 2019 that “they traumatized the whole United States child demographic with killing her off right before their eyes.”

But the character’s popularity prevented her from staying dead, and The Six Million Dollar Man‘s third season opened with a two-parter that brought back Jaime, “The Return of the Bionic Woman.” In January 1976, during the second half of that broadcast season, Lee Majors and Wagner reprised their roles for a Bionic Woman series, developed by Johnson. Speaking with SciFi Pulse, Johnson likened being handed the project to “living in a garbage disposal.”

Watch the Intro to ‘The Bionic Woman’

The president of ABC Entertainment was a man named Fred Silverman, a longtime television producer. His mid-’70s run saw him greenlighting many shows that took ABC to the top, although skeptics and critics attributed the phenomenon to the canny casting of attractive young women in shows primed for exploitation. The handle ABC had on the ratings was such that The Bionic Woman was able to reach the top five for that season, even topping the show it spun off from.

Despite ABC’s reputation at the time, Jaime’s appeal went beyond Wagner’s looks. Speaking to Den of Geek much later, Johnson said he “never even thought about either the demo or trying to get Jaime into a swimsuit.” And even though The Bionic Woman looking and feeling a lot like The Six Million Dollar Man, with the same heavy use of slow-motion and iconic crank sound effects, its lead performance made for a much different show.

Jaime Sommers, all-American tennis champ, could not have been more different from Steve Austin, and Wagner’s performance went in a much different direction. Far from his stoic squinting, she brought life to the show with winking charm.

Watch a 1976 Commercial Spot for ‘The Bionic Woman’

Her body language was loose and casual, not quite mocking the show’s sillier plotlines so much as providing a human touch, with eye-rolls and hair flips punctuating the obligatory slow-motion action scenes. She was peeved when a date stood her up, gentle and perceptive with friends and ultimately as believable as an action hero as Steve Austin. It’s no wonder Wagner won an Emmy for the role in 1977.

Despite Wagner’s capabilities as an actor, the show’s storylines veered from its parent show’s tone toward something lighter and campier. The Six Million Dollar Man could go silly or could go hard-boiled, but it was never quite as elastic as The Bionic Woman.

The show could handle spy storylines on top of plots like a salon using mind-control shampoo; Jaime having to go undercover in the pro-wrestling circuit; and even the saga of a bionic dog past its prime (which almost became yet another spin-off). Steve Austin flitting in for a crossover episode brought both worlds together, and those episodes ended up being among both shows’ best.

Crossover events like the shows’ Sasquatch saga and the three-part “Kill Oscar” relied heavily on inter-show continuity, trusting the audience to watch one show one night and the other on another night to keep up with the narrative over the course of a couple weeks. “Kill Oscar” in particular gave Steve and Jaime an ingenious array of villains in fembots designed to replace the secretaries of the OSI.

When the show moved from ABC to NBC for its third and final season, the crossovers no longer took place, and the stories began to suffer. The 1977-78 season ended up with both series facing cancellation.

While Johnson used his success to move into other, greater science-fiction territory with miniseries like V and the surprisingly nuanced television adaptation of Alien Nation (as well as producing the classic The Incredible Hulk series starring Bill Bixby and Lou Ferrigno), Majors and Wagner continued their regular television work, reuniting every couple of years for a Six Million Dollar Man/Bionic Woman TV movie. The final special, Bionic Ever After? premiered in 1994, and finally fulfills the promise of Jaime’s introduction by closing with the bionic couple’s marriage.

The franchise’s continued resilience, lasting two decades after Martin Caldin’s Cyborg was first adapted for the small screen, is proof of the audience’s affection for the characters. Without Johnson’s original script for “The Bionic Woman,” none of that would have come to fruition. Speaking of the show’s ill-fated 2007 reboot, Johnson noted that “the new Bionic Woman sank like a rock because it didn’t resemble in any way the humanism and humor we had in the original.”

Johnson also paid respect to the Bionic Woman herself: “Nor did they have an actress like Lindsay Wagner.”