Why the Black Crowes Are ‘Having Fun Playing’ Again 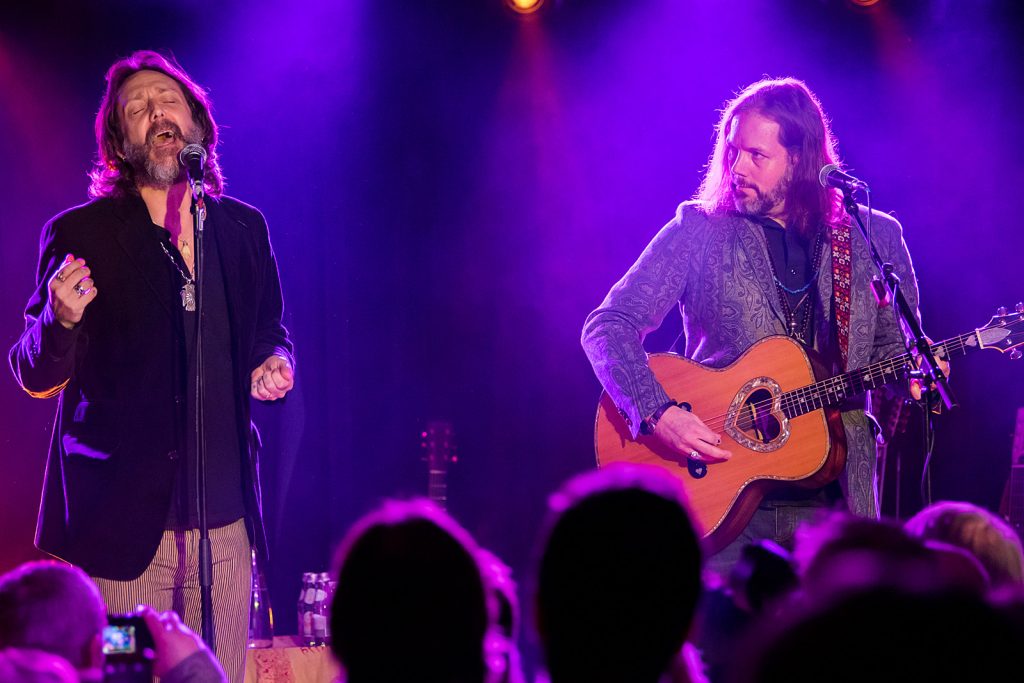 Last year’s 30th-anniversary expansion of the Black Crowes‘ debut album bottles some of the lightning from their initial year of touring in support of Shake Your Money Maker.

Disc 3 focuses on homecoming concerts held at the Center Stage in Atlanta in December 1990, where the Black Crowes had plenty to celebrate – including singer Chris Robinson’s 24th birthday. They came armed with songs from their first album but also new material that was already starting to develop.

“You’re Wrong,” a driving rocker, originally made its debut in a mellower form during an episode of MTV Unplugged with Tesla that November, although the track was left on the cutting-room floor. The same month, the Black Crowes rolled out “Words You Throw Away,” a nearly 14-minute jammy epic, during an Indianapolis tour date.

Parts of “Words You Throw Away” were harvested for “Remedy,” but otherwise both songs remained unreleased until appearing on the concert-focused portion of the box. The 14-song disc is compiled from recordings from two of the three nights in Atlanta, which featured Rolling Stones keyboardist Chuck Leavell reprising his role from the Money Maker sessions.

Concerts like those helped the Black Crowes build a strong musical foundation, as guitarist Rich Robinson later confirmed that he and Chis penned some two albums’ worth of songs on the road. But it also began a long period of friction between the brothers.

The band ended up going on hiatus several times over the years, followed by a breakup in 2015 that seemed permanent. A long-awaited reunion, revealed in November 2019, came with some conditions: Bassist Sven Pipien is the lone holdover from previous lineups, as the Robinson brothers elected to move forward with an otherwise new band of players in order to help keep the peace.

The Robinsons began with a short series of acoustic gigs as a duo in early 2020 to help reestablish their musical partnership, a process showcased in Brothers of a Feather. The new concert movie on the Coda Collection channel was filmed just days before the pandemic put the brakes on all touring, including the Black Crowes’ larger summer tour.

Now, the fully electrified Shake Your Money Maker dates finally get underway on July 20 with a pair of gigs in Nashville. The Black Crowes will kick off each evening by performing the first album in full, something they’ve never done before.

Their second sets will feature other fan favorites from the Black Crowes catalog, and additional surprises are promised. UCR caught up with Chris and Rich Robinson to find out more as they took a brief break from ongoing tour rehearsals.

The acoustic shows last year were so special. I’m glad that one of those nights has been preserved with the new Brothers of a Feather film. What was it like for you to get back out there together?
Chris: Doing acoustic shows is the most nerve-wracking for me as the vocalist. You’re completely naked, and you really want them to be good. There’s no bass and [electric] guitars. It was a great feeling, but to me, doing acoustic shows are kind of like the most work in a way – in a good way. But Rich and I have been doing this for a little over three decades now. I think to mend our relationship and to be playing music together [is really special]. I think one thing Rich and I have always agreed on, too, is that when you get up there, you want to do your best. There’s no phoning it in or anything. Of course, we want to pour what we have into a performance like that.

Did you go back to earlier performances, either video or recordings of old shows in general, for any sort of point of reference as you were working to put the pieces back together?
Rich: No, not really.

Chris: You know we have a new band. I think the one thing is that we just want everyone to be comfortable. We’re focused on this Shake Your Money Maker presentation, and it’s something we never did. We never played those songs in sequence. Shake Your Money Maker comes out in 1990, and we never played all of those songs in one night ever. So, for us, we want to find the sweet spot. In a weird way, everything in the Black Crowes is dyslexic. [Both brothers laugh] And in a sense, it’s okay. Cool, so now we’re playing this record and how do we find the [way of] making this the strongest presentation we can? It makes it really new, you know what I mean? Because we never put our focus into something like this. So in a sense, it’s the oldest record and our most commercial record, but we’re finding this new way of doing it as three decades have gone past.

I loved reading a quote from you recently about the realization you had listening back to Shake Your Money Maker, as far as how much AC/DC there was in the approach of the rhythm section at that time. Did you guys grow up as AC/DC fans?
Rich: Yeah, yeah. Huge AC/DC fans.

Chris: We’re old enough to have had a lot of great guitar-based rock ‘n’ roll music on the radio and summertimes around the pool. There were the Van Halen guys, and we were AC/DC and Aerosmith kids. Those were our two bands. I think that the one thing that has separated the Black Crowes from a lot of modern rock bands or bands of our generation was that we loved AC/DC, but we also listened to Chuck Berry and Bo Diddley and Jerry Lee Lewis. We also listened to B.B. King and Albert Collins. We liked blues and early rock ‘n’ roll. Bands like AC/DC were really just a continuation of that in terms of their sound and the way they were the essence of what rock ‘n’ roll is. That’s something that always, I think, been attractive to us.

You’re in the rehearsal process right now. What’s that really been like, working through things with the band?
Rich: It’s really natural. It’s just us getting in a room and having fun playing. No one’s really been out playing with each other for 18 months. So to get in a room and play with everyone has been pretty amazing. And everyone has this extra enthusiasm that it’s finally here. It’s like a mountain that we had to climb, and now we’re ready to go.

Chris: I think the other part of it is, Rich and I, as different as we are in some aspects, we don’t like to overdo it either. We like for things to fall into place. I mean, this is probably the most rehearsals we’ve ever done. We would always be one of the worst. We’d have a big showcase show in the early days, and we would go in and we’d be like, “Oh, fuck. Here we are in the rehearsal space.” But I think part of that, again, is that you don’t want to overdo it and kill that. You want to be prepared, but the real dynamic comes when the audience is in front of you. There’s an electricity that exists that can never be replicated in the rehearsal space. We kind of like to let it all fall into place. I’m sure there’s little details that we won’t even be aware of until we’re onstage Tuesday night.

Besides playing the Shake Your Money Maker album in full, are there other songs that you either haven’t played from the other records or just haven’t played in a long time that you wanted to take a run at that you’ve been working on in rehearsals?
Chris: There’s songs on Shake Your Money Maker like “Could I’ve Been So Blind,” “Struttin’ Blues” and to some extent, “Stare It Cold,” that had kind of fallen out of the repertoire. I think we’ve revisited some stuff from By Your Side, which we hadn’t played in a while. That will be in the second half of the show – “Kickin’ My Heart Around,” “Go Faster,” “Only a Fool,” songs like that which we didn’t really play that much. Our focus is a real high energy, guitar-driven rock ‘n’ roll show. There’s not a lot of that in the world. We don’t have in-ear monitors and digital fucking amps. And amps in boxes on trucks behind the stage. You know what I mean? We’re pushing some air up there. I think that’s the excitement of rock ‘n’ roll.

Outside of the tour, it sounds like there’s a lot of music. I’ve heard there’s like two albums’ worth, perhaps? Can you talk about that music and what’s developing there stylistically. Have you recorded any of it yet?
Chris: There might be two albums’ worth, but we’re not in a hurry to make a record. I think Rich and I have been having a really good time enjoying the process of writing. The whole Shake Your Money Maker focus that we have is pushing us towards [the idea that], “Oh wow, like, it’s fun to play rock music. It’s fun to play verse / chorus / verse / chorus / middle eight / chorus.” It worked for the Rolling Stones and it works for AC/DC and it works for Metallica – you know, bands. I don’t think it’s rehashing anything at all. I think it’s just, like, as you get older too, it’s like, “Oh wow, we were really into punk music.” You know, college radio, the Replacements were a huge part of our influence and a band that was in our rock ‘n’ roll vocabulary and the culture that we were building. The expansiveness of the Black Crowes has always been something we were in to, but this, I think we really want to tighten it up and focus on some rock ‘n’ roll music. At least today, I think that would be the kind of record we would like to make.

Listen to the Black Crowes’ ‘Only a Fool’

I think fans are really excited that you’re going back with [A&R executive, mentor and producer] George Drakoulias for this next round. That’s pretty exciting.
Chris: Really exciting. George is the catalyst. Without George, I don’t know if Rich and I are sitting here. You know what I mean?

Oh, yeah.
Chris: He taught us so much and he took a chance on us and he believed in us. He was really our lifeline. Being kids from Atlanta, we weren’t in the music business. We weren’t in New York; we weren’t in L.A. George was the guy. He saw something in our talent and saw something in our writing, and he pushed us. I think it’s the same thing there today. I don’t think there would be very many people that we trust as much as we do George.

In general, was the break and time apart helpful and beneficial in any way when it comes to us sitting here talking today?
Rich: Yeah, of course.

Chris: Yeah, yeah. We had a lot to learn on our own. We had a lot of experiences together. A lot of great things and some negative things. We had to go out on our own. It was a learning curve for both of us, a real soulful experience. And again, I can’t speak for Rich – it sounds like I am right now, but I can’t. I think that people – well, I’ll tell you this, it would have been a big fucking waste of a decade apart if we couldn’t come back and be even stronger today.

For all of its woolly, trapped-in-the-’70s imagery, the genre has proven surprisingly resilient.