Why the Blues Brothers Made Their ‘SNL’ Debut in Bee Costumes 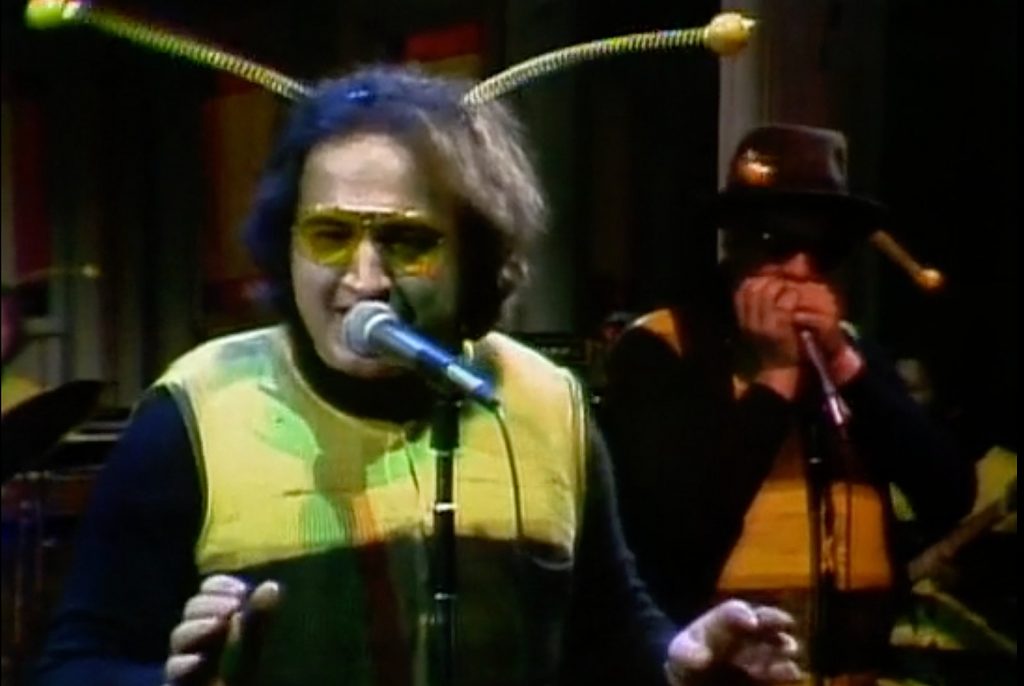 In the waning hours of the Saturday Night Live’s 10th episode – which aired on Jan. 17, 1976 – two characters popped up that would soon come to define the late-night comedy show: the Blues Brothers.

To be clear, this wasn’t Jake and Elwood Blues as the world would later come to know them – two black suited musicians on a mission from God. Instead, John Belushi and Dan Aykroyd first donned sunglasses and delivered the blues while dressed in ridiculous bee costumes.

The Killer Bees had been an early staple of Saturday Night Live, officially becoming the series’ first recurring characters. A sketch in the show’s debut episode, titled “Bee Hospital,” featured cast members in bee costumes mulling around a labor and delivery ward, pondering whether their child would be a worker, drone or queen. The sketch bombed, so much so that NBC felt the need to point out the disaster to SNL creator Lorne Michaels.

“The only note we got from the network on the first show was, ‘Cut the bees,’” Michaels recalled in the book Live From New York: The Complete, Uncensored History of Saturday Night Live. “And so I made sure to put them in the next show.”

The bees continually popped up throughout SNL’s first season; Michaels used the gag as an ongoing symbol of defiance to the network. Belushi regularly appeared as a member of the bee colony.

“John was [in] the first scene of the first show, and I don’t think he had a good scene again for another three shows,” recalled the star’s widow, Judith. “Something that made a break of sorts was the third or fourth bee scene, when he went off on ‘I hate being a bee’ and this whole ‘bee’ thing, and he had his antennae swinging around his head in some special way. It was really the first time he got to show his personality and show that there was more to him, and he got a great response. But it took a while. It was slow to grow.”

Indeed, there was no real connection among the bee sketches, aside from the ridiculous costumes. One week the bees would be conversing with the show’s guest host; another week they’d be ice skating in Rockefeller Plaza. They could even sing the blues.

Years before their time together on Saturday Night Live, it was Aykroyd who opened Belushi’s eyes (and ears) to the blues. The two found a common love of the genre, but they wouldn’t fully invest in the idea of making music together until relocating to New York for SNL.

Aykroyd had a knack for the harmonica, while Belushi had always wanted to sing in a rock band. “The alpha Illinois male,” Aykroyd described his collaborator to Vanity Fair, noting what Belushi lacked in vocal talent he more than made up for in stage presence. “One of those people like Teddy Roosevelt or Mick Jagger. He was just one of those great charismatics who turned heads and dominated a room.”

The duo developed performances by playing local New York club gigs in between their SNL responsibilities. Eventually, Michaels agreed to let them perform prior to show tapings as a way to warm up the studio crowd. But the guys wanted to be on TV, and the series’ creator was uneasy about dedicating air time to an amateur blues performance. They’d need a MacGuffin to make it work. Enter the bees.

On Jan. 17, 1976, Belushi confidently strode up to the microphone, ready to deliver his first SNL blues performance; to his left Aykroyd, harmonica in hand. Behind him, the show’s house band. Every one of them was decked out in bee costumes. In fact, the band – led by future Oscar-winning composer Howard Shore – was billed as “Howard Shore and His All-Bee Band” for the performance. Naturally, the song they delivered was “I’m a King Bee,” the classic 1957 blues made famous by Slim Harpo.

“All right now, are you ready for the blues?” Belushi asked the studio audience and millions of viewers watching at home. “Now, how many people out there, how many men out there ever had an old lady leave them?” the actor continued, the band churning through blues riffs as he spoke. “You know, my old lady comes up to me and she said, ‘You been messin’ around.’ My old ladies come up to me and they say, ‘You been messin’ around with some other women.’ And I say, ‘Honey, you just take as I am. Or you just let me bee.’”

From there, Belushi launched into the song’s lyrics, singing about searching for his queen, making honey and buzzing around the hive (we’ll let you decode the euphemism). Though he played it straight in the first verse, the comedian’s antics soon picked up: A call-and-repeat from the crowd, cartwheels and somersaults onstage followed. All this while floppy antennae spun around Belushi’s yellow-and-black striped figure. Equal parts impressive and ridiculous, the sketch earned enthusiastic applause from the audience.

Despite this positive response, the musical exploits of Belushi and Aykroyd would remain behind the scenes for another two years. It wasn’t until April 22, 1978, that the Blues Brothers – this time in their distinctive black suits and dark sunglasses – would again appear on SNL. Platinum selling albums and an iconic feature film would follow, cementing the duo’s place in pop-culture history. But it all started with the bees.