Why the Original ‘Casino Royale’ Is the Weirdest James Bond Film 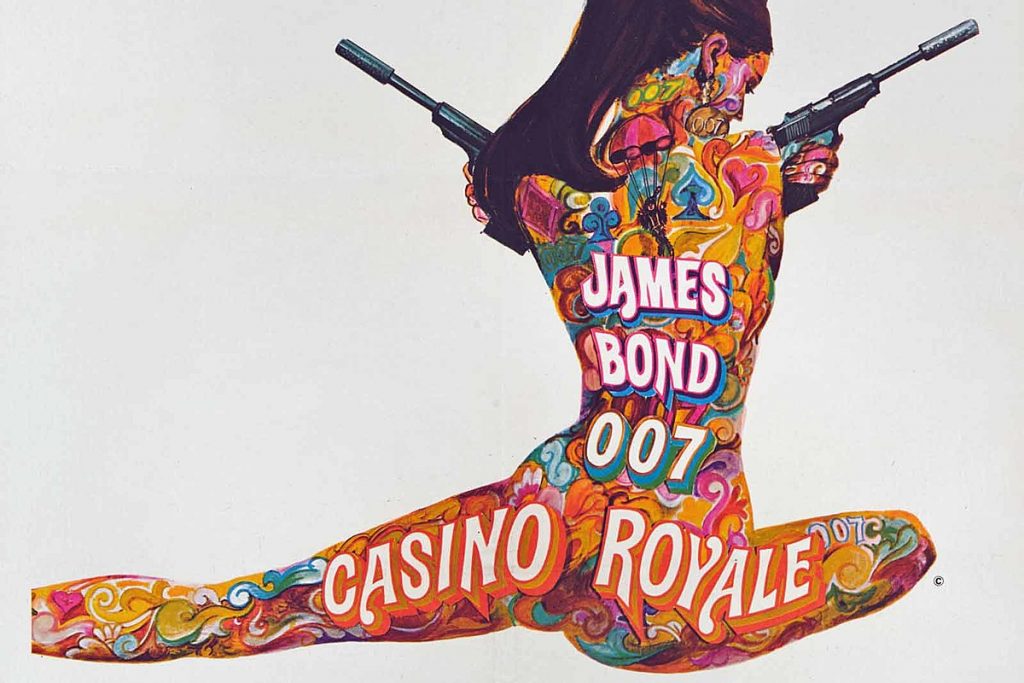 There are many debates about the James Bond franchise: Which is the greatest movie? Which actor is the greatest Bond? Who is the best villain or the best Bond Girl? But there’s one film about which there can be no disagreement: Casino Royale, released in London on April 13, 1967, is not only the weirdest Bond film, but one of the weirdest movies of its type ever put down on celluloid.

Like so many Hollywood stories involving intellectual property, the tale of its creation is fascinating. The novel Casino Royale, published in 1953, was Ian Fleming’s first book and introduced the world to James Bond. The movie rights to the book were originally purchased by Gregory Ratoff, an actor and director who was most notable for his role as producer Max Fabian in All About Eve in 1950 and for directing Ingrid Bergman’s U.S. debut, Intermezzo: A Love Story, from 1939.

But Ratoff died before he could bring an adaption of Fleming’s novel to the screen, and the rights to the book were purchased in 1961 by Charles K. Feldman, whose producing highlights included Orson Welles‘ Macbeth; A Streetcar Named Desire, starring Vivian Leigh and Marlon Brando; and Billy Wilder’s The Seven Year Itch, starring Marilyn Monroe. The actors seemed to be aligning for a star-driven James Bond movie debut; at one point, the idea was to have Billy Wilder direct the film, legendary screenwriter Leigh Brackett write it and Cary Grant star as Bond.

But before Feldman could bring this project to the screen, an American, Albert R. Broccoli, and a Canadian, Harry Saltzman, formed Eon Productions in England and put out Dr. No with Sean Connery playing Bond. The film, which came out in 1962, was a smash hit. Broccoli and Saltzman, who owned the rights to the rest of Fleming’s Bond novels, immediately began churning out sequels.

For better or worse, Feldman decided that, rather than go into competition with the franchise, he would make Casino Royale as a satire. It was released after the fourth Eon film, Thunderball, and only months before the fifth, You Only Live Twice.

Casino Royale is based on an initial screenplay by titanic writing talent Ben Hecht (whose career included six Academy Award Best Screenplay nominations and two victories) that was then rewritten behind the scenes by Billy Wilder, with additions by Terry Southern, before being worked on by credited writers Wolf Mankowitz, John Law and Michael Sayers. It was filmed by six directors, including John Huston, and featured a stunning cast of luminaries, including David Niven, Orson Welles, Peter Sellers, Ursula Andress, Woody Allen, William Holden, John Huston, Charles Boyer, Jacqueline Bisset, Jean-Paul Belmondo and many more.

Watch the Trailer for ‘Casino Royale’

The plot is complicated and at times virtually incomprehensible, but basically centers on Bond (Niven), who has been in retirement for 20 years. But because of the importance of his reputation, the spymasters at MI6 have been calling other spies “James Bond.” The most recent of these – described as a “sex maniac” – has given up spying and gone to work in television, so the world desperately needs the real Bond to come out of retirement, because the nefarious evil-doing group SMERSH is killing spies.

Representatives from MI6, the CIA and the KGB visit Bond at his country villa in the opening scene to try to convince him to come out of retirement. After he refuses, they call in a mortar bombardment and destroy his villa, accidentally killing “M” – the head of MI6, played by Huston – in the process.

Suitably impressed by the gravity of the situation, Bond agrees to take the place of “M” and run the operation. When he discovers that the weakness of spies worldwide is their inability to resist sex, he decides that the best course of action is to confuse SMERSH by having all British agents call themselves “James Bond” and to train them to resist the advances of even the most beautiful temptresses.

Bond then convinces Mata Bond (Joanna Pettet) – the daughter he fathered with Mata Hari – to infiltrate a SMERSH training center in Berlin. She finds out that a SMERSH agent named Le Chiffre (Welles) has embezzled money from the parent company and desperately needs to win a huge amount at baccarat so he can pay it back.

This leads to Bond recruiting baccarat expert Evelyn Tremble (Sellers) to bankrupt Le Chiffre at the table in the Casino Royale. The plan succeeds, but Le Chiffre captures Tremble and subjects him to psychedelic torture. At the same time, Mata is kidnapped by SMERSH agents in a flying saucer and transported to the casino.

Watch a Scene From ‘Casino Royale’

That’s followed by a final confrontation in which Bond realizes that the casino sits on top of a secret SMERSH headquarters and that the head of the evil group is none other than his nephew Jimmy Bond (Allen), who is planning to kill every man on the planet who is taller than 4′ 6″, leaving himself as the tallest man in the world and making him irresistible to women. At the end of this confrontation, the casino explodes, and the final shot is of the cast in heaven playing harps.

Even though this plot may seem outlandish, no summary can convey how spectacularly weird the film actually is. There are endless gags, some of them sharp, some of them drawn out to astonishingly strange lengths. The tone of the film is a combination of absurdism, psychedelia, experimental and broad spoof.

And perhaps because of the mishmash of directors, there are also a number of bizarre shifts in style. The sequence in which Mata infiltrates the SMERSH training center is done in a purely referential German expressionist mode, with a set that looks like something out of Willy Wonka & the Chocolate Factory, full of skewed staircases, bizarre shadows and broken compositions. The final action scene, in contrast, is a gonzo parody of Hollywood fight scenes, complete with cavalry-charge footage spliced in from an old Western movie (the horses and riders then end up riding into the melee in the casino), Indians parachuting out of airplanes to join the fray, spliced shots from the Keystone Kops, a pair of aggressive seals and countless other gimmicks.

Perhaps the purest distillation of this weirdness is the hallucinatory torture inflicted on Tremble by Le Chiffre. This gets more and more bizarre until Tremble finds himself in a smog-filled space filled with marching bagpipers. Eventually, the nominal Bond Girl of the film, Vesper Lynd (Andress) will appear and mow down everyone with a machine gun disguised as a bagpipe. But before she does, Peter O’Toole comes marching by and asks Tremble, “Are you Peter O’Toole?” “No,” replies Peter Sellers, playing Tremble, “I’m Richard Burton.” O’Toole smiles appreciatively and says, “Then you’re the finest man who ever breathed.” Sellers gives O’Toole’s bagpipe a grateful tug, and O’Toole returns the gesture by tugging on a tassel on Sellers’s kilt. “God bless you,” says O’Toole, who marches away, never to be seen again.

And it’s all set to a Burt Bacharach score that features Herb Alpert & the Tijuana Brass performing the title track, and Dusty Springfield singing “The Look of Love,” which plays during a scene in which Vesper Lynd seduces Tremble. (“The Look of Love” received an Academy Award nomination for Best Original Song.)

It’s a reminder that even in something so familiar as the Bond franchise, there are loose cannons. And that no matter how formulaic Hollywood films can at times seem, there are always strange happenings that break the mold of what came before.