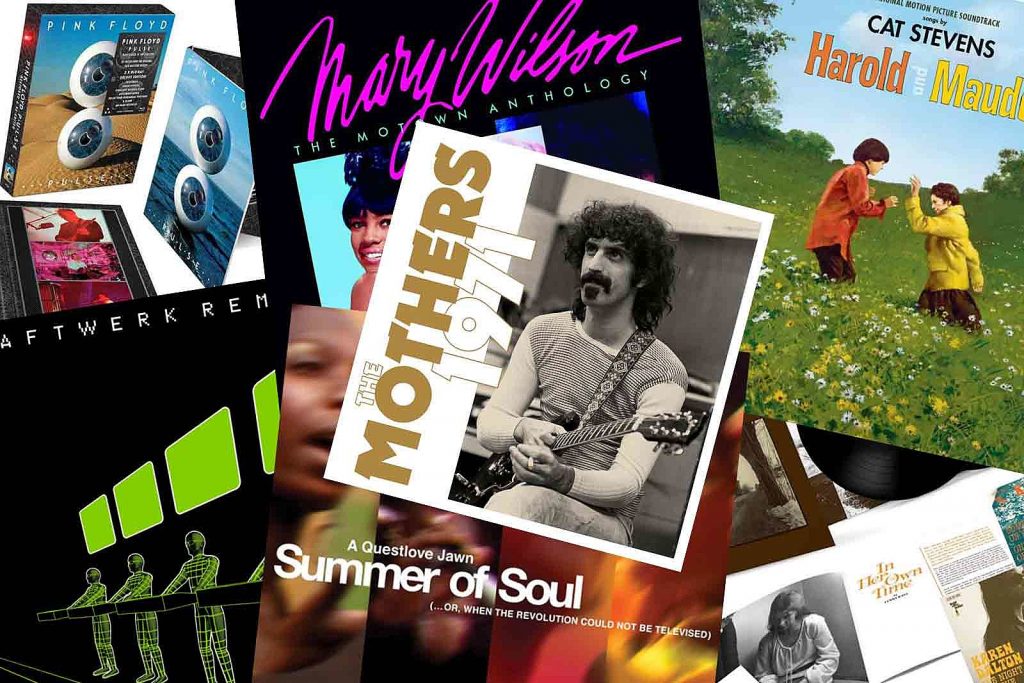 The year is off to a slow start as far as reissues and archival releases go – but that’s to be expected.

Post-holiday winter months are typically a period to regroup and get ready for the rest of the year after the big holiday releases that marked the previous quarter.

Nevertheless, the past three months have yielded a handful of reissues worth hearing, including new sets of old material by Pink Floyd and Frank Zappa.

There’s also a remix album featuring inductees of the most recent Rock & Roll Hall of Fame class; a soundtrack LP with a patchy release history that now includes dialogue and instrumental music from the film; and the first-ever career-spanning anthology by a Motown artist who was there from almost the beginning.

But the highlight of the latest batch of reissues and archival material is the soundtrack to last year’s best documentary, best music film and one of the best overall movies. The recordings – both audio and visual – have sat on the shelf for more than 50 years before their recent rediscovery. Summer of Soul ( … Or, When the Revolution Could Not Be Televised) is a breathtaking work, and its premiere last year is finally being celebrated on record.

What It Is: Karen Dalton released only two albums, 1969’s It’s So Hard to Tell Who’s Going to Love You the Best and 1971’s In My Own Time. Neither sold well, but their reputations and influence have grown since her 1993 death at age 55.

What’s on It: The super deluxe and single-disc 50th-anniversary editions include six previously unreleased live recordings and a handful of alternate studio takes from the folk and blues singer whose uneasy life was reflected in her weary voice.

Best Song You Know: Dalton got her start in the same early ’60s Greenwich Village scene as Bob Dylan and Fred Neil, whom she covered on her first LP. The highlight on Time is a cover of Dino Valenti’s “Something on Your Mind,” which opens the record.

Best Song You Don’t Know: An alternate take of “Something on Your Mind” – one of three from the sessions here – shows just how unconventional and freewheeling Dalton could be from performance to performance. The live tracks are revealing, too.

What It Is: This two-disc compilation – featuring remixes of various Kraftwerk classics by William Orbit, Orbital and others – originally streamed online in December 2020, less than a year before the German electronic pioneers became Rock Hall inductees.

What’s on It: Culled from 12″ and CD singles and digital releases, there’s overlap among the 19 tracks, including seven versions of Kraftwerk’s 1999 song “Expo 2000.” But there’s much to play around with here, so every take sounds new.

Best Song You Know: The title track to 1975’s Radioactivity is one of the band’s best works. It’s updated for the 21st century with a pair of remixes. The wildest – a seven-and-a-half-minute “Francois Kervorkian 12″ Remix” – remodels while staying faithful.

Best Song You Don’t Know: “Non Stop” was created as a 30-second soundbite for MTV in the ’80s. Kraftwerk recently expanded the concept to an eight-minute whirlwind track that opens Remixes, highlighting the influence on DJs and clubs over the years.

What It Is: Pink Floyd’s 1995 concert movie was re-edited for its inclusion on 2019’s The Later Years box set. This new stand-alone release upgrades the packaging for collectors, including new artwork and the blinking lights from the original CD.

What’s on It: The two-disc DVD features videos, concert-screen films from the tour, rehearsal footage and documentaries chronicling the band’s Division Bell Tour from 1994. The sets included songs from throughout Pink Floyd’s career.

Best Song You Know: The Pulse album reached No. 1 in 1995, thanks to its greatest-hits track listing. An epic “Shine on You Crazy Diamond” opens the set; a delicate “Wish You Were Here” recorded in Rome in September 1994 was released as a single.

Best Song You Don’t Know: The rehearsal footage goes behind the scenes of the band’s first shows to include Syd Barrett‘s “Astronomy Domine” since the early ’70s, and complete performances of Floyd’s landmark album The Dark Side of the Moon.

What It Is: The soundtrack to Hal Ashby’s 1971 dark comedy about a death-obsessed teen and his relationship with an old woman includes more than a half-dozen songs from Cat Stevens‘ two 1970 albums, Mona Bone Jakon and Tea for the Tillerman.

What’s on It: This expanded anniversary edition adds dialogue and instrumental music from the film to the remastered original LP’s nine tracks. (The soundtrack’s release was limited to Japan at the time). Stevens contributed two original songs to the movie, too.

Best Song You Know: “Where Do the Children Play?” opened Tea for the Tillerman, Stevens’ breakthrough album, and works just as well in Harold and Maude. “On the Road to Find Out” and the Tillerman title track are also on the soundtrack.

Best Song You Don’t Know: “Don’t Be Shy” and “If You Want to Sing, Sing Out” were written by Stevens for the film after director Ashby approached him about contributing. The movie’s stars, Bud Cort and Ruth Gordon, sing the latter in a version here.

What It Is: This two-CD set marks the first complete look at Wilson’s career. She was with the Primettes before they became the Supremes and was part of the group long after Diana Ross left. Plus, she had a solo career. Wilson died last year at 76.

What’s on It: Three dozen songs span Wilson’s career – from the Primettes’ Wilson-led 1960 B-side “Pretty Baby” to a remix of her 1979 solo song “Red Hot” that was released after her death last year. Most of the music comes, naturally, from the Supremes.

Best Song You Know: Ross sang most of the leads on Supremes singles until she left the group in 1970, so Wilson didn’t get much of the spotlight until after that. The 1971 song “Floy Joy” (co-sung with new Supreme Jean Terrell) made it to No. 16.

Best Song You Don’t Know: Wilson often stood in Ross’ shadow during her Supremes years; The Motown Anthology uncovers many of the lost gems from that period, including an unreleased live version of Frankie Valli’s “Can’t Take My Eyes Off You.”

What It Is: Eight discs document Frank Zappa and the Mothers‘ June 1971 two-day run at New York’s Fillmore East, just a few weeks before the historic venue closed. Every note played during the four shows is included here … plus much, much more.

What’s on It: In addition to the Fillmore shows, The Mothers 1971 includes a radio spot, a single version and its B-side and performances from shows in Harrisburg and Scranton, Penn., and London.

Best Song You Know: A 45-minute album from the concerts was released in 1971 as Fillmore East – June 1971 that included songs like “Willie the Pimp,” “Peaches en Regalia” and “Happy Together,” sung by the Turtles’ Flo & Eddie, part of Zappa’s band.

Best Song You Don’t Know: John Lennon and Yoko Ono were onstage for six songs at June 6’s late show. Their entire 30-minute encore set is included here for the first time unedited. Interesting, but the track “A Small Eternity With Yoko Ono” sums it up.

Various Artists, Summer of Soul ( … Or, When the Revolution Could Not Be Televised) Original Motion Picture Soundtrack

What It Is: One of last year’s best movies finally gets a soundtrack. A few weeks before Woodstock, a bunch of artists played the Harlem Cultural Festival. The events were filmed but sat on the shelf for more than 50 years. The film was a revelation …

What’s on It: … and so is the music included here, heard for the first time. B.B. King, Gladys Knight & the Pips and Nina Simone are highlights, but everyone sounds like they’re giving the performances of their life. The visuals help, but the music is great.

Best Song You Know: These are all unreleased live versions, but you’ll know the hit songs: the 5th Dimension’s “Aquarius / Let the Sunshine In,” Knight & the Pips’ “I Heard It Through the Grapevine” and Mongo Santamaria’s “Watermelon Man.”

Best Song You Don’t Know: Sly & the Family Stone would break out in a big way just a few weeks later thanks to Woodstock, but they also hog the spotlight here. Their “Everyday People” and “Sing a Simple Song” are film and soundtrack essentials.