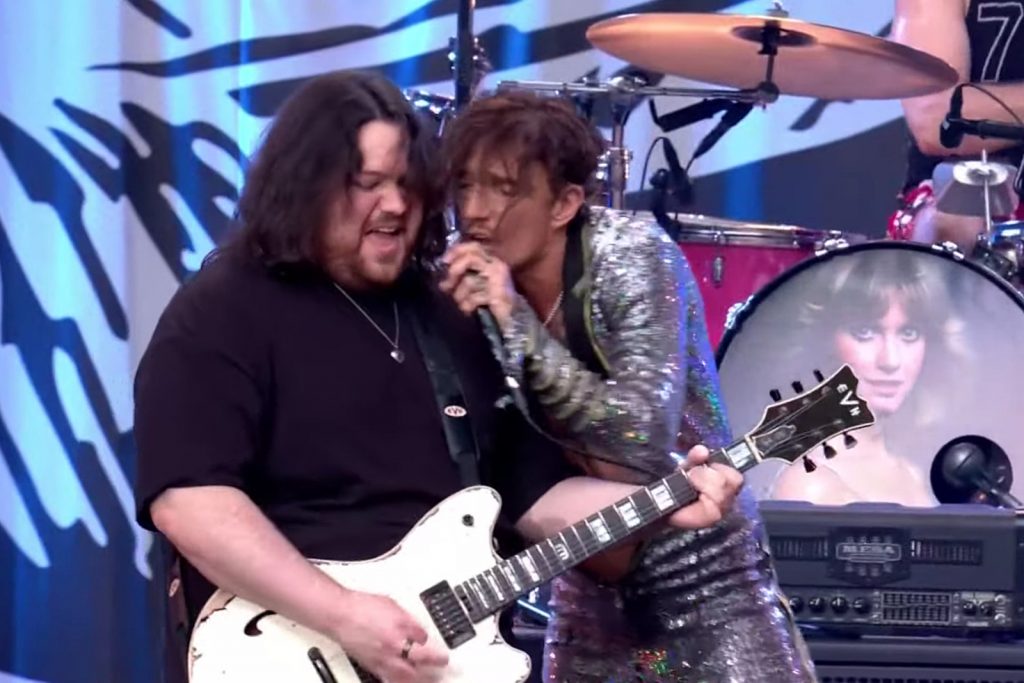 Wolfgang Van Halen busted out a pair of Van Halen tunes in a high-energy tribute to Taylor Hawkins at the late Foo Fighters drummer’s memorial concert in London.

The emotional moment came during a set performed by members of Hawkins’ side-project bands, Chevy Metal and the Coattail Riders.

“It should come as no surprise that Taylor was a huge Van Halen fan,” Dave Grohl told the Wembley Stadium audience as the running total of contributions via the YouTube livestream topped $15,000. “Remember those tights? We are lucky enough tonight to have with us a real Van Halen. Would you please welcome Mr. Wolfgang Van Halen to the stage right now?”

With the Darkness frontman Justin Hawkins on lead vocals and Grohl on bass – and a picture of the late Hawkins with Eddie and Wolfgang Van Halen being screened around the stadium – the younger Van Halen opened with his dad’s band’s track “On Fire,” hinting at what was to come.

After that, as the unmistakable drum intro to “Hot for Teacher” began, Van Halen appeared to take a moment before bursting into his own take on his father’s trademark shredding. At one key moment, Hawkins held his mic under Van Halen’s hands, shaking his head as if he wondered how he’d gotten there, while Grohl glared with menacing excitement. Despite the demands of the moment, Van Halen even managed to deliver some vocal harmonies.

The younger Van Halen has staunchly refused to mimic his late dad’s guitar theatrics. Last year, in response to a fan telling him the time was right to do so, he replied: “I honor my dad by existing and doing what I do every day. I’m not fuckin’ playing ‘Panama’ for you guys.” His change of heart was clearly an emotional tribute to a lost friend, but it also proved a point that many were hoping to have proved: that Wolfgang is more than capable of playing his pop’s music when the occasion calls for it.

The Van Halen cover set followed a series of covers of Hawkins-penned songs, including “It’s Over” and “Louise,” featuring members of his other bands and Justin Hawkins on lead vocals. Before that, pop star Kesha had delivered a breathtaking, animalistic cover of T. Rex’s “Children of the Revolution.”

“Taylor would have loved seeing all you guys coming out,” Chevy Metal bassist Wiley Hodgden told the crowd. “He’d be laughing his ass off – his brothers just played Wembley!”

Van Halen has long been vocal about his love of the Foo Fighters’ music and noted that it played a big role in how he approached his own first steps with the project that became Mammoth WVH. “I’ve always admired Dave Grohl and how he did the first Foo Fighters album,” he told UCR during a 2021 conversation. “That was definitely a big inspiration.”

He was quick to pay tribute as the news of Hawkins’ death circulated, taking the stage in Boston the following day, offering up an emotional version of the Foos’ “My Hero,” which he said the band had prepared earlier in the afternoon prior to that night’s gig. “He was a hero to me, and a hero to all of us, and a hero to countless people, so we feel this is necessary,” he told fans.

The song stayed in the band’s set list for the run of shows that followed, and during an April 2022 interview with Q104.3, Van Halen shared that while his personal encounters with Hawkins weren’t frequent, they were extremely meaningful.

Hawkins had come backstage at a Van Halen date in San Diego on the band’s A Different Kind of Truth tour in 2012, where he regaled both Wolfgang and his father with a stream of stories. The younger Van Halen, who had seen the drummer and Foo Fighters live numerous times, was thrilled.

“He told me that him and Dave Grohl had listened to the A Different Kind of Truth album, and he told me specifically they were geeking out on the song “China Town” where I tap the intro with Pop,” Van Halen recalled. “And they were, like, ‘That’s so awesome.’ And that blew my mind as a 21-year-old person — God, I’m 31 now — that Dave Grohl and Taylor Hawkins had sat and geeked out to me playing bass. That blew my mind.”

Sharing a photo of the moment on Instagram, Van Halen noted how important and inspirational Hawkins had been to him. “He was such a ridiculously kind man. The dude just emanated cool,” Van Halen wrote. “Him, my pops and I talked for as long as we could until we had to leave. An incredible drummer and singer, he was a constant inspiration to me throughout my entire life. This is like a kick in the gut.”

Hawkins will receive a second round of accolades at an additional tribute concert scheduled for Sept. 27 in Los Angeles.

The torch is being passed.